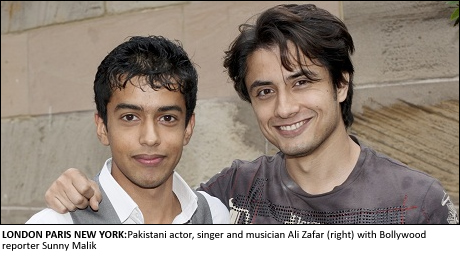 LONDON Paris New York stars Bollywood’s newest sensations – Pakistani actor, singer and musician Ali Zafar, who has also penned and performs on the official soundtrack to the film, and South Indian actress Aditi Rao Hydari.
London Paris New York is a quirky and unique, coming-of-age drama that intersperses the significance of the number three, as it follows the journey of love between ‘Nikhil’ (Ali Zafar) and ‘Lalitha’ (Aditi Rao Hydari) who meet for a night in three cities, London, Paris and New York. Mirroring three states of love in a heart-warming, amusing and stylish plot, ‘London Paris New York’ is said to bring razor sharp wit back into Bollywood’s romantic comedies.
Bollywood Reporter Sunny Malik spoke to Pakistani multi-talent Ali Zafar about the film
How did the film come about? How did you get on board?

Anu Menon, the director met me and gave me the script. I loved it when I read it. Everyone who came on board came after reading and loving the script of London Paris New York. It just all came together.

Did you know that Aditi Rao will be the heroine of the film when you signed London Paris New York?

No, not at that time. In fact, we had common discussions. The director, me and the producers discussed quite a lot on whom to cast and who would be the right girl. We all thought that Aditi would be the perfect person for the film.

As you have worked with Katrina Kaif in your last film, were you considering any A-list actresses for the film at any point?

No, we were looking for a fresher face.
Is that because the role requires someone to be quite new?

Yeah, that was the preference. We wanted someone who was not as seen and could bring some freshness to the film. The script and the treatment of the story is very fresh and Aditi suited the role perfectly.
You got three different looks in each city; London, Paris and in New York. Is your character in each city different as well or do you play pretty much the same guy?

He is pretty much the same guy but he is of course growing up. The story starts in London, after two years he goes to Paris and then after six years he meets the same girl in New York. It is spread out over a period of eight years. The looks obviously keep changing, the way they dress up and the way they style their hair and even their personalities change throughout the period. The characters are evolving and maturing.
Which was your favourite look and period in the film? London, Paris or New York?

I think the New York look is my favourite.
You have written the songs, composed the music and even sang for the soundtrack. How much time went into all of this?

A lot of time went into the music actually as I was shooting the film simultaneously. I was travelling a lot. But I did spend time in the studios and a lot of time was spent over Skype with different musicians over arranging the songs. The entire music has been produced in Pakistan, so whenever I was travelling I was on Skype with producers and musicians to programme the songs.
How was it working a debutant director again?

All my last three films have been with new directors. I think they bring in new thoughts and it’s been fun working with them. They never made me feel that they are new.
But this time around it was a female director. Were there any differences in that way?

Yes, it was different than working with my previous male directors. I think, there is certain way that boys connect to boys and there is a certain way you connect with a woman. That difference was definitely there and it was fascinating to understand the female perspective in a lot of scenes.
How was it like to shoot the film in London? You have quite a lot of fans here. Were you mobbed while filming the movie?

Yeah, there were several crazy fan moments. They would come and scream and take pictures and all of that.

After My Name is Khan, Dum Maaro Dum and Ekk Deewana Tha, now 20th Century Fox is distributing your film in the UK. Do you think it will help the film because this particular studio is associated with the film?

It is always helpful to have someone like Fox on board. They bring in their own brand and the way they market and promote the film is amazing. It’s fantastic the way they distribute the film all over the world. It makes a big difference to have them with us on the film. We have also made a very new-age film and everybody who came together like Sony Music and Fox, they are a great team together. They are like-minded people and we all are together here to make an honest film.

Just a few days ago, there were reports that the film has been inspired by a Hollywood film. What do you have to say about that?

Once you see the film, all these rumours about any similarities will fade away, I mean, yes a lot of film are love stories and of the same genre and they sometimes have a similar vibe because they are all dramatic love stories. But it’s an original script and when you go and watch it, I don’t think any other film will come to your mind.

What next for you as an actor?

I am working on Chashme Badoor and that will release next. I have signed another project as well but I can’t talk about it right now.