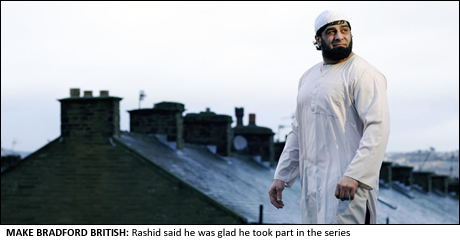 CHANNEL 4 is set to test what it means to be British in a major two-part series called ‘Make Bradford British’.
The series, which hits our screens on 1 March, brings together eight people of different races and backgrounds for the first time, to see if they can come up with a common notion of the thread that binds them all together – what it means to be British. The group split into pairs to live each other’s lives, experiencing a different side of life that exists right on their doorstep.
Taking part in the series is former professional Rugby League player Rashid.
The 37-year-old was born and raised in the heart of Bradford’s inner city Asian community and believes a lack of understanding of other cultures makes integration difficult in the city.
Here he reveals why he’s glad he took part in the series.
Why did you decide to take part in this project?
At the beginning I was in two minds. As a Muslim I try and pray five-times-a-day, and I didn’t want that to be an obstruction or a burden on anyone. But they say when you win the heart over, you’ve got the person. They took me out for a meal a couple of times, and I didn’t see any bad in them, to be honest. I saw good in them. So I thought “If they can allow me to pray, then I might just go ahead with it.”
Why is Bradford such a segregated place?
I think people don’t know each other’s cultures. That’s why I think this programme’s a good experiment. As a Muslim, our predecessors integrated with people – until you integrate, you don’t know what people are like. It doesn’t matter about colour, race or language. As a Muslim, if I was following the proper way of life, I should invite you to my house for a slice of cake and a pot of tea. There’s nothing wrong with that. But people in Bradford don’t know each other’s cultures, and are a bit wary of each other. But I think it’s changing. I hope we can achieve more integration.
Was taking part in this project the experience you expected it to be?
I didn’t really know what to expect. They told us a bit, but to be honest, I didn’t have the foggiest. I thought I might have been living with someone from Poland, someone from the Czech Republic, someone from the West Indies. Then, when we were all sat round the table for the first time, I knew there’d be some conflict, because people’s dietary requirements are different, people have got habits – I pray, some people drink, some smoke – so there was always going to be a little bit of a clash. So I expected that, when I understood what was going on?
Do you think you were fairly represented in the programme?
Yeah. There were some good bits that I wish had made it in, but I understand that they couldn’t because they had to fit so much in. There were some really funny bits, but I’m not the director, I can’t tell them what to out in and what not to put in. But yeah, I was myself, I was just being myself.
What were the high and the low points of the whole project for you?
The whole thing was quite emotional, you know? Some of the stuff that went on touched your heart.
What do you think you learned from this experience?
I’ve learned that we need to rise above how we feel towards each other. In Islam there are lots of different sects as well, and there are a lot of differences and cultural problems. We should rise above that, work together, and show good character.
What this taught me was that we all need to be there for each other. As our predecessors used to do, we should live for others. If you cook something nice, give a bit to a neighbour, whether they’re Muslim or non-Muslim. It is part of our way of life, we’ve been taught it, but we don’t do it. Everyone’s a human being at the end of the day, and the world would be such a better place if we all looked at each other’s good points and not weaknesses.
Honestly, I’m glad I did it. I learned a bit more about how people live and how people eat and how people relax. You learn stuff by living with people. We should have people into our homes more; invite them in for food or a cup of tea, just for the pleasure of it.
Do you think this experience has changed you at all?
It possibly has, yeah. I think maybe I’ve got a little bit more consideration for different cultures, and people who have different beliefs. Not that I didn’t have that before – we get taught that. As a Muslim, you get taught to respect every religion.
What do you think it means to be British?
Wherever I go in the world, people will look at me, and they won’t think I’m British. They’ll think I’m Pakistani, Sri Lankan, Indian or Bangladeshi. But I’m a British citizen, I’ve been born and bred in England. I think Britishness is the citizenship we have.
Make Bradford British, Thursday 1 March, 9pm, Channel 4