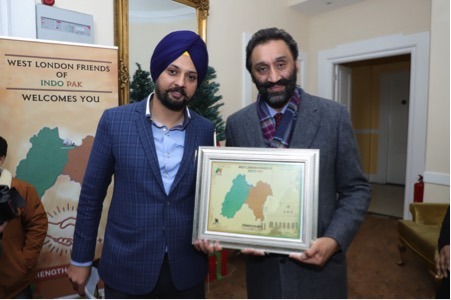 A magnificent event on Kartarpur Sahib Corridor was organized by West London Friends of Indo Pak. Darshan Singh Grewal chairman of the organisation welcomed everyone followed by Gen Secretary Shafiq Rehman introducing all WLFIP team to media and audience at The Centre Banqueting Hall in Southall on Wednesday 19th December 2018.

Around 450 people of both communities participated in it and there was great arrangement for entertainment. Ardaas was made by Sikh community and Muslim community also performed their religious ceremony. It was for the first time that ‘Allah Akbar ‘and ‘Bole So Nihaal ‘ was uttered together by all people and it was new experience for Everyone .

Dignitaries such as Tanmanjeet Singh Dhesi (MP, Slough), Youth leader Vikram Singh Grewal both participated in the event and addressed the audience. Dhesi congratulated both Prime Ministers of Indo-Pak for fulfilling the long awaited desire of Punjabis.Tan Dhesi delivered lecture in Punjabi and praised this initiative and as well congratulating all involved for future.

Vikram said Narinder Modi’s vision and Imran Khan’s friendship with Navjot Sidhu has achieved this historical decision and now it should benefit the region with open trade across the border.

Keynote speaker Ranjit Singh Rana spoke about history of Kartarpur Sahib while giving examples from Shri Guru Granth Sahib , Quran and poetry of Baba Bulla Shah and Waris Shah. A slide show was presented by Shafiq Rehman that illustrated the aims objectives and mission of WLFIP

Malkit Singh Grewal President Shiromani Akali Dal UK spoke to media and said it took 8 more years to get this decision since it was brought in Punjab assembly in 2010.

An enthralling documentary was presented by APS Mann based on history and current situation of Kartarpur Sahib Corridor. Mann said they will organise further events in the future based on British-Punjabi issues and culture to bring communities close as Punjab deserve peace and prosperity.