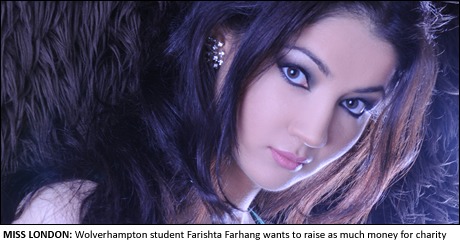 A WOLVERHAMPTON Student is hoping to do her bit for charity – by winning the Miss London beauty pageant.
Farishta Farhang, from Solihull, will go up against a host of other beauties vying for the crown in the grand final next month.
Once crowned Miss London, the winner will go on to compete in Miss England and then on to Miss World.
But for Farishta, a pharmacy student at the University of Wolverhampton, participating in the pageant isn’t about beauty and looks; it’s about raising money for charity and helping others.
Having never entered a beauty pageant before, Farishta reveals she was drawn to Miss London after researching ways to raise money for charity.
“From a young age I had a lot of responsibilities on me which I believe made me a stronger person and made me understand how the less fortunate feel,” she tells The Asian Today.
“One day randomly I was on Google searching how I could do some charity work in third world countries when I came across Miss World and read about the section ‘Beauty with Purpose’. When I continued researching I realised that it wasn’t just a beauty pageant but also projected what I always wanted to do and aimed for. Which of course lead me to apply for Miss London. I just want to show the whole of UK that if we all do our little part we can bring a huge change to those less fortunate than us and I know with the Asian community behind me I can win Miss London then Miss England and in near future Miss world and show to the world what us British-Asians are like.”
Farishta hopes to fly the flag for British Asians should she win. And she’s proving she’s got brains as well as beauty having published her debut book ‘‘Stranger’s Love: Family’s Blood’ last year with younger sister Tahmina.
“The aim of the book is to make young adults like myself understand what is wrong and what is right and to know how much their parents care for them. It also tells young adults that parents have their own way of showing their love,” she says of the book which is available to buy from Amazon.
And while she hopes to continue writing her main aim at the moment is to raise money for charity and inspire British Asians to fulfill their dreams.
“I want everyone out there to believe in themselves and chase after their dreams and if someone says ‘you cant do it’ prove them wrong by achieving it in a positive way just like I’m doing.”
Members of the public can help Farishta to the crown by voting for her as well as donating money to selected charities Thai Childrens Trust and Deloitte Charities who help raise money for Cancer Research UK, Help for Heroes and Children with Cancer. You can vote for Farishta by texting MISS LONDON15 to 63333 or by calling 09013071037 followed by unique number ‘15.’ Voting lines close on Monday, March 12 at 5pm.