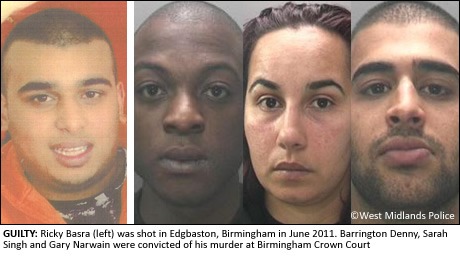 THREE people have been sentenced to life imprisonment for the murder of a 22-year-old man, who was shot dead in Edgbaston in June 2011.
Barrington Denny, 23, from Birmingham, was sentenced to life imprisonment, to serve at least 28 years. He had pleaded guilty to the murder of Ricky Basra at an earlier hearing.
Gary Narwain, 21, from Walsall, was sentenced to life, to serve a minimum 26 years and Sarah Singh, 31, from Birmingham, was sentenced to life, to serve at least 22 years.
Both were found guilty of the murder following a trial at Birmingham Crown Court.
Victim Ricky Basra, 22, was shot dead on Melville Road, Edgbaston on June 21, 2011.
The court heard Mr Basra was shot at close range by Denny after he was lured to Melville Road by Sarah Singh.
Gary Narwain, the court was told, was a close associated of Denny who was involved in the planning of the murder and helped dispose key evidence after.
At the sentencing, the murder was described by the Judge as a perfectly planned and executed assassination.
Following the guilty verdict, Ranjit Kaur, mother of Ricky Basra, released a statement describing her son as “precious.”
She said: “Ricky was my loving, precious son and a good brother to Ravi.
“Nothing can bring Ricky back to us, but we can try to move on now we have justice for him. We would like to thank the police investigation team and the prosecution team.
“I would like to say a special thank you to the people and residents who gave first aid to my son on the night he was shot. To know he didn’t die alone gives me some comfort.
“I would also like to thank all Ricky’s friends who have been a great support to myself and Ravi, coming to court with us every day.”
DS Rob Bastin from Force CID said: “This cowardly and callous attack has had a lasting effect on Ricky’s family and friends and my thoughts and sympathy go out to them today. I hope this verdict gives those close to Ricky some comfort. I know they are still coming to terms with their loss.
“West Midlands Police are fully committed to bring those offenders to justice who seek to use or arm themselves with firearms.”