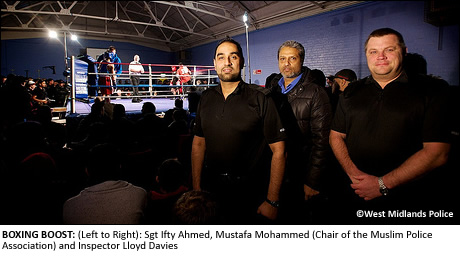 POLICE in Birmingham have helped fund a boxing competition that was setup to support local youngsters.
The competition took place at the Windmill Amateur Boxing Club on Messenger Road on Friday evening (10 February). It was arranged by local young people who use the club’s facilities on a regular basis.
The club enables young people to participate in fully supervised boxing training that improves their fitness and offers them a environment in which to meet and have fun.
Officers from Birmingham West and Central police provided £750 through the local Police Partnership Fund to support the initiative.
The competition on Friday saw youngsters from the club take part in friendly competition against other clubs from Sheffield and Birmingham.
More than 300 parents, family members and friends packed the community building to watch the action and support their loved ones.
Sergeant Ifty Ahmed, who helped secure the funding, said: “We are really proud to have been involved with this initiative. The local youngsters involved in this club come from a variety of backgrounds and have shown in the recent past that they can work alongside police to ensure good community relations.
“We are keen to reach out to local young people and show that we are willing to work with them at a place they feel most comfortable.
“It is well documented that boxing can instill discipline, commitment and a sense of control to young people and we hope they can put these traits to good use in later life.”
Windmill Boxing coach, Mohammed Abdullah, said: “We would like to thank West Midlands Police for helping provide funding for such a positive event.
“The atmosphere in the venue was electric and all of the youngsters were and praised after each and every bout.”

Hospital appointment with the PM

RDF’s Shop Well For Less? To return to BBC One