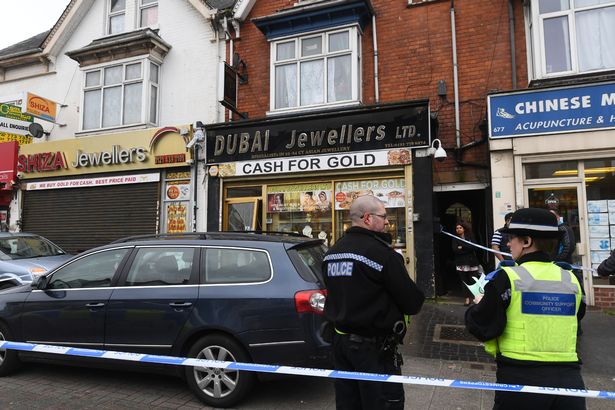 A gang who stormed a jewellery store on Stratford Road in Birmingham have been led away in handcuffs.

The gang also beat up the shop owner during the raid which took place around 2.50pm on Tuesday.

It is alleged that five raiders forced their way into the jewellery store in broad daylight, after attacking the raider some of the raiders ran down the stratford Road but were apprehended by the police.

Mobile phone footage, which has been posted online shows a man in a suit being led away in handcuffs by the police. A total of three arrests were made at the scene.

Two men are due to appear before Birmingham Magistrates Court on April 18. James Sarricker, 48, of Birmingham Road, West Bromwich, has been charged with robbery and refusing to provide a sample for a drugs test and Billey Abbots, 20 of Welsh House Farm Road, Quinton, is charged with one count of robbery.

A third man remains in police custody in hospital.

Pardeep Kumar, the brother of the store owner. He said the victim was beaten by a group of men. He said one posed as a policeman to gain entry.

Mr Kumar said: “One flashed a police badge and said he needed to see CCTV.

“They gained entry and were beating him for 25 minutes.

“My brother was taken to the QE Hospital with cuts and bruises.”

A West Midlands Police spokesman added: “Arrests were made at scene and enquires are on-going.