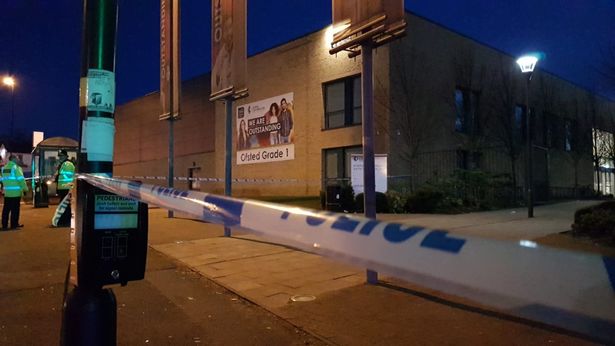 A Birmingham teenager, believed to be a first-year student, suffered a stab wound to his chest on Wednesday. He is in a critical condition after he was stabbed after a disturbance at a city college. The horrific incident unfolded at Joseph Chamberlain College Sixth Form Centre Highgate campus.

The 16-year-old collapsed in the courtyard area after violence erupted shortly before 4pm.

The sixth form college, based in Highgate, has announced it is to remain closed on Thursday after the ‘incident’.

People across our city have said: “This has to stop!”

A teenager is fighting for his life after a harrowing knife attack at a college.

The 16-year-old suffered a stab wound to his chest following a disturbance at Joseph Chamberlain College Sixth Form Centre.

A 19-year-old and an 18-year-old suffered minor cuts following the disorder on Belgrave Road.

West Midlands Police arrested a 16-year-old suspect who was nearby and he is due to be questioned in due course.

The attack happened just an hour before another teenager was also stabbed in the chest in Orchard Meadow Walk, Castle Vale.

Witnesses to the Highgate stabbing said the 16-year-old victim was knifed by a masked offender.

Eyewitnesses say, the attacker stormed into the college grounds wearing what appeared to be either a balaclava or ski mask.

“I noticed that something was wrong,” explained an 18-year-old bystander.

“I was holding him until paramedics come.

“He was stabbed just to the right of his stomach.

“The attacker was wearing a bally, a ski mask or something and I saw police arrest him on the floor.”

Three ambulances attended the scene in Highgate alongside a MERIT trauma doctor and two further doctors and paramedics.

The stab victim, according to West Midlands Police, remains in a critical condition in hospital.

Kerry Chant said: “And so it carries on. When do they learn knives aren’t the way. It doesn’t just impact on the victim’s family, it also impacts on the family of the person who carries the knife / weapon.”

While Sharon Williams added: “What is going on in Birmingham lately? It’s getting out of hand.”

And Christine Barton wrote: “I hate living in this city, it’s getting worse.”

Kiran Afzal said: “What’s wrong with teenagers these days? Why are they ruining their lives?”

Cindy Farrington simply put: “This has to stop!”

While Michelle Gillespie agreed, saying: “Seriously, when is this going to stop?”

Jan Barrass commented: “No-one is safe just dreadful, well done to young lad who stayed with him and gave him comfort, pray your help gets him through.”

Gina Gi Gi added on Facebook: “WTF is this country coming to! This country has gone soft, they do it because they know they can get away with it! F****** joke! Hope the teenager pulls through, thoughts are with the family too.”

And Kerry Borland said: “Nothing new here, it’s not even shocking anymore, just the norm. Horrible world we live in.”

A spokesman for West Midlands Police said: “A 16-year-old has been arrested after three other teenagers were injured in a disturbance on Belgrave Road this afternoon (13th February).

“Officers were called at around 4.10pm and one boy aged 16 was taken to hospital in a critical condition.

“He is believed to have suffered stab wounds to the chest.

“A 19-year-old was left with minor cuts to his back and his hand, while an 18-year-old was also treated for a cut to his hand.”

The statement added: “The investigation is at an early stage, and officers remain at the scene this evening.

“The teenage suspect was arrested nearby and will be questioned in due course.

“Anyone with information has been asked to contact police via Live Chat at west-midlands.police.uk between 8am and midnight or call 101 anytime.

Joseph Chamberlain college will be closed for the rest of the week.

In a message posted on its website, the college wrote: “We can confirm an incident occurred outside the college on Belgrave Road.

“As it is a police investigation, we are unable to comment further at this time.

“Our thoughts are with with the student who was attacked and his family.

“The college is closed to students for the rest of the week.

“Lessons will resume after the half-term holiday.”

It said: “We are in attendance at Joseph Chamberlain College.

“We were called at 4.15pm to reports of an assault.

“We have sent three ambulances, a merit trauma doctor, two further doctors and two paramedics to the scene, where we are treating two patients. It’s is ongoing.”