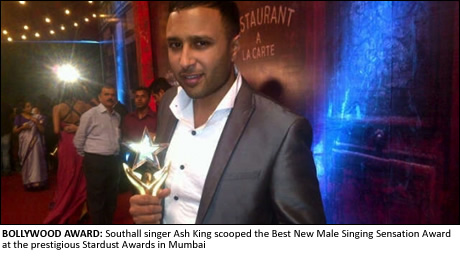 A SINGER from Southall has scooped a major Bollywood award.
Singer, songwriter Ash King was in Mumbai to collect his Best New Male Singing Sensation award at the prestigious Stardust Awards.
The singer is becoming a regular on the Bollywood music scene having sung for a number of Bollywood blockbusters.
The evening saw him rubbing shoulders with some of the world’s biggest Indian film stars including the legendary Rekha, Akshay Kumar, Deepika Padukone, Vidya Balan, Kajol, Kareena Kapoor, and Bipasha Basu.
Ash beat off tough competition from the likes of Ali Zafar, Kamal Khan and Shahid Mallya, all of whom featured in the same category.
Accepting the Award he said: “Thank you, what a year. Bollywood has shown me so much love. I’m touched. Here’s to more songs, more magic. Thank you to the fans! It has been a great year for my songs, especially ‘Te Amo’ and ‘I Love You’, big thanks to Pritam for that. A R Rahman introduced me to the industry and I am ever grateful. It is an honour to be part of this industry.”
Ash rounded off with an acapella of ‘I Love You’ and woo’d the all-star crowd, before Kareena Kapoor dazzled the stage with her medley of dance numbers from her latest movie ‘Ek Main Aur Ekk Tu’ – including Ash King’s current Bollywood hit ‘Aunty Ji’.

The London boy from Southall is rocking Bollywood and is dubbed the one to watch this year. Upon walking the red carpet and leaving the ceremony, King was met with a fan frenzy. Ever the entertainer he sang ‘Te Amo’ for his fans, in what became a media rush to catch the live impromptu medley of Ash King songs, with award in hand.

Ash continues his stay in India this month to record more material, having already sung on no less than six major Bollywood soundtracks, including work with Oscar-winning AR Rahman and much loved Bollywood maestro Pritam. His hits have included ‘Dil Gira Dafatan’ (‘Dehli 6’), ‘Te Amo’ (‘Dum Maaro Dum’) and ‘I Love You’ (‘Bodyguard’).