Home Sports Netan Sansara: ‘Pearce is our man for the Euro’s’

Brit Asian footballer has his say on Capello, Pearce and Redknapp 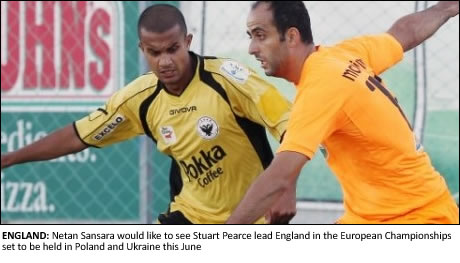 STUART Pearce should lead England into the European Championships, according to Asian Today columnist and Paeek FC defender Netan Sansara.
The defender believes Pearce, who will lead the Great Britain Football team at the London Olympics, has the right attributes to get the best out of the England squad ahead of the summer showpiece tournament.
All focus is on manager-less England following Fabio Capello’s shock resignation earlier this week.
The Italian, who spent just over four years in charge of the national team, walked out following a row over the FA’s decision to strip John Terry of the England captaincy following race abuse allegations.
And while the FA have confirmed Pearce will take the reins for a friendly against Holland on 29 February, Sansara believes he’s the right man for the Euro’s which will be held in Poland and Ukraine this June.
“I would let Stuart Pearce take over at the European Championships; he works with the youth set up and seniors so his knowledge of all the players is probably the best out of everyone,” Sansara told The Asian Today.
“He’s respected by all the players and I think he is a great motivator and can get the most out of the players.”
Sansara said he was “shocked” to see Capello walk out on England so close to the Euro’s, but believes a breakdown in relations with the FA over the John Terry captaincy saga meant it was inevitable they would part ways.
“Capello was put under serious pressure by the FA because of the comments he made about the John Terry captaincy issue and it was a mutual decision,” Sansara said.
“I think the FA wanted him gone and Fabio decided that it was time too. The FA didn’t want their reputation to be damaged further regarding the ‘race issue’ and Fabio’s statement so it was inevitable.”
Sansara doesn’t believe the situation will affect the England players.
“There might be some players who had a better relationship with Capello then other players probably did, but that’s football. Professional footballers are used to seeing change with managers all the time so I think for them its just business as normal.”
With all talk of Harry Redknapp making the switch from Tottenham Hotspur to England, Sansara believes that while the opportunity may have come too soon with Spurs flying high in the Premiership, the former West Ham boss is the obvious choice as long term successor to Capello.
“Harry Redknapp has always stated his desire to one day manage England but his chance may have come too soon,” Sansara said.
“Tottenham are doing so well playing the best football they’ve ever played and still have a slight chance for the title so it makes me question why Harry would want to give that up so soon. Harry’s a great manager and he’s proved that on a number of occasions.
“It’s important whoever the FA appoint has to be English so maybe it’s made for Harry Redknapp.”

Matter: How To Writing Someone Without One Showing To My Bill

Not Talking My Language