Singer talks to The Asian Today 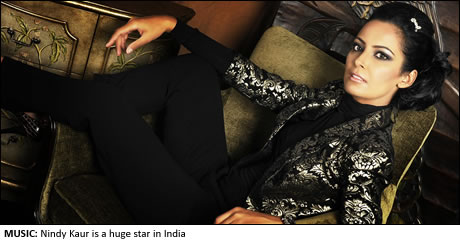 SINGER Nindy Kaur definitely knows what it’s like to be number one in India.
The Brit-born singer is a regular on the Bollywood music scene and has enjoyed number one chart success. Collaborating with Urban chart toppers RDB – India’s answer to the Black Eyed Peas – Nindy has become one of the biggest female singers in the Asian music industry and she’s set to have an even bigger 2012.
We caught up with the singer to talk music, performing and singing in the shower!
Nindy how did you get noticed?
It was by Manj (now Nindy’s husband) from RDB who kept pushing me to get into the studio and record. I was like everyone else – a superstar singer in my car and in my shower! (Laughs) Manj really liked my voice and kept insisting I get into the studio with RDB. A track came along where they needed a female singer so I gave it a go. The rest is as they say history!
Is singing something you’ve always dreamed of doing?

I never really set out to be a singer. To be around such a successful group as RDB facilitated the transition and I can’t lie it’s a lot of fun but definitely a lot of hard work and long hours.
Have you had any vocal training?
(Laughs) Well to be honest I was never trained professionally, more of a natural to be honest but most of my guidance came from my hubby Manj. Without his guidance I wouldn’t be where I am today vocally.
What do you enjoy most about singing and performing?

It will sound cliché but it is the fan reaction to the songs. When you are on stage in front of thousands, to hear them singing back your track is a moment in life you wish you could bottle up. I will never get tired of that feeling.
Musically who inspires you?

It has to be people like Lady Gaga, the Old Skool Punjabi bands like Sahotas and of course Manj who has been the back bone of my music, confidence, voice and support.
Is it hard to keep track of the number of singles and albums you’ve collaborated on?

To be honest I’ve lost count with the many songs I’ve released with RDB! It’s past a dozen now and there are many more in the works. This year however I am excited to be releasing my debut solo album, ‘NINDYPENDANT’. I’ve released the first two singles, ‘Two Seater’ and ‘Deewani’ with the third single around the corner ‘SAVE THE WORLD Feat Culture Shock’ which I’m really looking forward to as its a complete mainstream feel track with my touch of pure Punjabi style. The album will be out soon with 10 original Nindy tracks alongside a host of guests.
Did you ever think you’d have number one hits and be performing in front of millions of people?

Who really does? You always hope so but when it happens you can never be prepared for it. It’s overwhelming knowing what you have written and sung really means something to not just one person but millions. As an artist you can’t help but convey your inner thoughts on paper and to reassure fans when they connect with your music that they are not the only ones going through the same emotions is a much welcomed feeling.
You’ve done solo work as well as collaborations- do you prefer doing one over the other?

There is an anticipation that builds when doing both. To feed off the energy from others during a collaboration and to push yourself personally when doing a solo track each in its own way really motivates me to do my best.
You were an ambassador for the IIFA’s – India’s answer to the Oscars. How was that for you?

In one word, flattering, the IIFA’s are the world’s biggest Bollywood stage.

To have them in North America for the first time was another massive accomplishment for the Indian movie industry. When Manj and I were asked to be ambassadors it didn’t take long to say yes. Toronto is our second home and the opportunity to host our friends in Bollywood was a welcomed pleasure. I’ll tell you, between rehearsals, private parties and dinners we didn’t get much rest that weekend!
What kind of feedback have you been getting from the media/your fans about your work?

All the feedback so far has been extremely positive. The fans have been very supportive of all my work with RDB and the way they have taken to my solo work I am truly grateful. If I could thank each and every one of them personally I would and I try my best to keep in touch with them all on my Facebook page and Twitter.

I think you can never really prepare for what the music industry plans for you. I believe if you stay true to your heart and make music you are proud of then your music will continue to grow regardless of trends. I’m excited about releasing NINDYPENDANT my solo debut shortly and starting the NINDYPENDANT world tour. In addition there are a host of RDB/NINDY KAUR tracks in the works so things are very busy at the moment.

Finally Nindy do you have a message or advice even for upcoming Bhangra artists in UK?

Just make the music you love and don’t conform to what you believe people want because people really just want to know the real you. Make music you are proud of and give it your all. We live in a tough economic time so when fans spend their hard earned dollar they should know they are getting your absolute best effort.

For all the latest news on Nindy log onto www.nindykaur.com

Ideas Flirt On Tinder? Finest 11 Tricks For Flirting On Tinder

Ideas Flirt On Tinder? Finest 11 Tricks For Flirting On Tinder