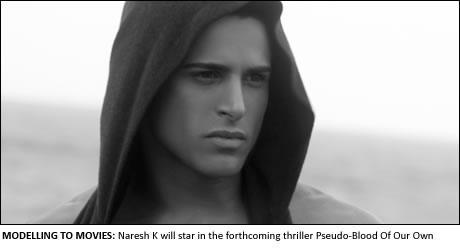 SUPRIYA Davda caught up with the very handsome and uber talented Naresh K. Currently in the midst of promoting his film and working alongside Fashion Designer Saran Kholi, journalist Supriya Davda managed to catch up with him about lighting the silver screens with his upcoming film Pseudo-Blood Of Our Own.
Naresh firstly tell us a little about yourself, how did you enter the world of modelling and arts?
My name is Naresh K and I am an international male actor and model born and raised in the England. In my early university days I had people complimenting me about my features and always said I should try my hand at modelling. To experiment a friend of my mine did a trial photo shoot and sent my pictures to agencies which to my surprise gave a positive response and now it is my full time career.
Do you think from modelling there is an organic movement into acting?
Yes I believe there is. Within modelling you do require some kind of versatility and acting attributes as at times you have to get into character to portray certain looks and emotions through the camera. So this did help me progress my skills further towards acting and performing arts.
Have you always wanted to be in the entertainment industry?
At a very early age I’ve always had a passion for performing arts from school plays to theatrical performances and studying the art at London, Birmingham, Acting schools and modelling at that time was a natural stepping stone to get into acting. Over time my passion developed more which gave me the drive and enthusiasm to accomplish my dreams to be in the entertainment industry.
Who do you wish to work with in the near future?
I am inspired by so many actors in the industry so I can’t only name one or two individuals, as there are many talented artistes that would give me pleasure to share screen space with.
Many actors from the UK struggle immensely to make a mark in the entertainment industry, how has it been for you?
I think this is one of the most competitive industries to break into. There are many aspiring models and actors all over the world, all vying for the same thing. The number of models and actors out there far outnumber the amount of work available, which also makes it tough. It takes a lot of effort and dedication in pursuing a career and I’ve been very lucky to have work come my way, but in saying that you need to have perseverance, persistency and be self motivated and always remain positive.
What advice would you give to aspiring actors today?
My advice would be to always persevere and believe in yourself and remain positive.  Work hard and live a healthy lifestyle and perfect and master your art.
Now you have a movie releasing Pseudo-Blood Of Our Own, tell us a little about it? It’s said to be along the lines of Bend It Like Beckham?
The film “Pseudo-Blood Of Our Own” is a crime/drama and is based on some true facts that actually have and still happen in British Columbia so the essence of the film is very realistic and is set in a cold region of north America. I play the main lead a British Metro cop, a key character ‘Sleaze’.
I would say that this film is nothing like Bend it like Beckham, as Pseudo is an Action, Thriller and deals with a subject where South Asians are living and making a difference in society where they live and grew up. So the film touches on an everyday life subjects rather than problems that exist in certain families due to family philosophies, old traditions and beliefs. They are two different genres and the story is directed in different perspectives.
Your ideal role would be?
I want to do roles that are character driven and to be a versatile actor so waiting for the right script that I believe in is essential especially if you want longevity within the industry.
Do you see yourself move to India and entering Bollywood?
I truly believe with respect to acting that you are a “nomad”, you go where ever your job takes you so if the script is right and very interesting then obviously I would love to work within Bollywood.
How do you see your life in the next five years?
My plans for the next five years is to make my mark as an established actor and use my success for good causes and  be able to have the ability to inspire others around me.
Pseudo-Blood Of Our Own releases this Christmas
Supriya Davda is a journalist specialising in the Indian film industry. You can follow her on Twitter @supriyadavda