The Curry Republic honoured by readers of The Spice Times 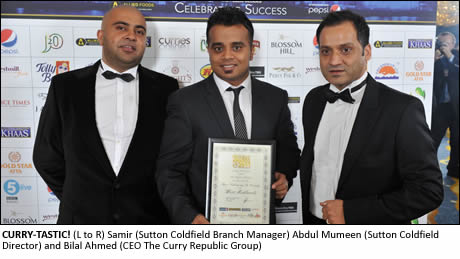 OWNERS of a West Midlands Indian takeaway chain are celebrating after being voted the best Indian takeaway in the region by members of the public.
The Curry Republic currently has two delivery kitchens; one in Sutton Coldfield and one in Henley-in-Arden which also includes a dine-in restaurant with an open kitchen for patrons who want to watch the chefs in action. The chain received the honour after readers of The Spice Times named it top of the shops at its annual National Restaurant Awards.
Bilal Ahmed, CEO of The Curry Republic Group, said: “We’re delighted to have been awarded this prestigious title, which is even more special because it is voted for by the public. We are dedicated to providing excellent quality and authentic cuisine, and this award recognises the hard work and dedication of our team.
“Our branches in Henley-in-Arden and Sutton Coldfield have proved extremely popular and as a result we are looking forward to opening further outlets in the Midlands in the very near future.”
Mr Ahmed collected the award at a glamorous gala ceremony at the Hilton Park Lane in London, which was hosted by ITV Daybreak’s breakfast presenter Tasmin Lucia Khan and treated over 1000 guests to performances from renowned British South Asian dance acts.
The Spice Times National Restaurants Awards were launched in 2010 by The Spice Times, a quarterly trade publication which is distributed to South Asian restaurants, with voting open to members of the public.