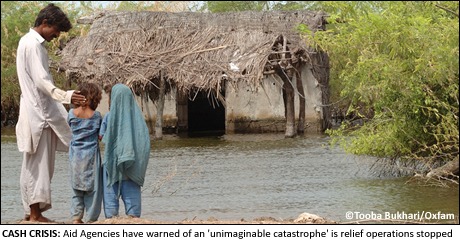 FLOOD-stricken communities in Pakistan could be at an even greater risk after Aid agencies conceded they may have to close vital programmes due to a lack of funds.
Over nine million people have been affected by the floods that hit in August.
More than two months into the disaster, over 1.58 million houses in Sindh and 26,000 in Balochistan have been damaged. People are forced to live in desperate conditions. More than three-quarters of the affected households have not received any shelter assistance while around 800,000 people are still displaced. According to the latest estimates three million people are in urgent need of emergency food assistance.
Aid agencies, including Oxfam, Save the Children, Care and ACTED, are urgently calling on the donor community to step up its response.

They say the lack of funding for the Pakistan flood relief programmes will have serious consequences if money isn’t found soon to help those in need
Oxfam says it would be forced to cut back on its efforts after December, meaning the 3.9 million people it had planned to reach would go without help.
Save the Children have raised only 35 percent so far of their global appeal for the Sindh floods, while Care faces a shortfall of 91 percent and is struggling to continue its relief programme at a time when the risk of an outbreak of disease and widespread malnutrition is escalating.

“Care has used its own resources to fund this response, which is focusing on emergency healthcare and food security. Due to a funding shortfall, we’ve only reached roughly 10 percent of the targeted 150,000 in need of emergency healthcare in the areas where we and our local partners operate,” said Waleed Rauf, Country Director of Care International in Pakistan.
Neva Khan, Oxfam’s Country Director in Pakistan, said stopping relief operations could lead to an “unimaginable catastrophe”.
“Over two months into the crisis millions of people are still without basics. If relief operations stop, it could lead to an unimaginable catastrophe,” she says.
“Healthcare, clean water and sanitation are needed to stem a looming public health crisis. The precarious food system is under threat as there’s an acute food shortage, and many farmers will miss the winter cropping season.
“With winter approaching fast, millions of people who are still without shelter will be left out in the cold.  We urgently need to see the same donor generosity and giving that took place last year during the floods.”
With communities living in desperate living conditions diseases are on the rise.
Stagnant waters and approaching winter season have strengthened the risk of a major outbreak of dengue, malaria and acute respiratory infection. Over 160,000 pregnant women require lifesaving medical services in the next six months.

“We had expected the situation to stabilize by now but conditions are going from bad to worse,” said Save the Children’s Pakistan Country Director, David Wright.
“Each day that passes puts more children at risk of contracting diseases. Malnutrition levels among children under-fives are among some of our worst recorded cases. Children’s immunity is very weak, and we fear winter will make the situation worse if aid is not immediately stepped up.”