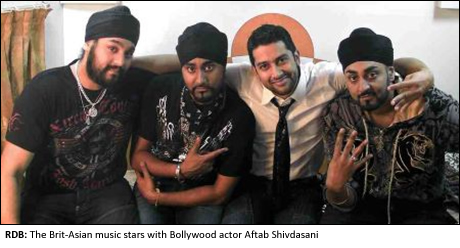 MUSIC artists RDB look like they’ve got another Bollywood admirer!
The three Bhangra brothers are already firm favourites of Akshay Kumar having collaborated with the Bollywood actor on numerous films.
And now they’ve bagged themselves another admirer – actor Aftab Shivdasani!
The actor is eager to get RDB on board his new film directed by Vikram Bhatt, having worked with the brothers during Aloo Chaat which he produced.
A source close to the actor reveals, “Aftab and the three brothers (members of RDB) had a whale of a time during Aloo Chaat. They got along like a house on fire and their music impressed the actor immensely.”
RDB are already riding high in the charts with their latest release ‘Shera Di Kaum’ from the Akshay Kumar produced film Speedy Singhs.