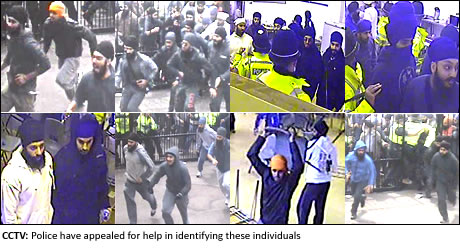 CCTV IMAGES have been released by police investigating disorder which broke out at a community centre in Dudley earlier this year.

Police launched an investigation after a pre-planned protest turned to violence on Swancote Road in the town on Saturday 28 May.
Violence erupted at around 12.45pm when people protesting at the serving of meat and alcohol at the centre forced their way into the building, which is adjacent to the Sri Guru Nanak Singh Sabha Gurdwara on Wellington Road.

Around 200 people were involved in the protest which resulted in a police officer and two members of the public receiving head injuries.

Roads around the building were closed for five hours to allow emergency services access to the site, while the force helicopter hovered overhead capturing the incident on camera.

Officers from across the force attended the incident to restore order and assist in negotiations between protesters and the centre’s management.

Protesters ended their occupation of the building at around 6pm when centre managers agreed to ban the supply of meat and alcohol on the premises.

Significant damage was caused to the inside of the community centre which remains cordoned-off this evening while specialist forensic examiners search for evidence.

Inspector Richard Jones, from Dudley Police, said: “What started as a peaceful protest turned to violence when a minority of people started throwing missiles at officers and then forced their way inside the centre.

“Significant damage was caused to the premises and our investigation into what happened on the day continues.

“Detectives have trawled through CCTV from the site and the vicinity as part of the inquiry and we now ask for help in identifying some of those people we would now like to speak to.

“We urge anyone with information to assist with identification to come forward and help us at their earliest convenience.”

Anyone with information on those responsible for the disorder and vandalism should call Dudley police on 0345 113 5000. Alternatively, people who do not wish to speak to police officers directly can call the independent charity Crimestoppers anonymously on 0800 555 111.