Rezwan and Rehan Javed made almost £1million from con 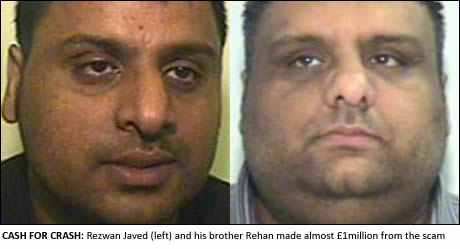 TWO brothers at the heart of one of the country’s biggest ever ‘crash for cash’ scams have been jailed.

Rezwan Javed, 34, and his older brother Rehan, 36, each benefited by about £1m from the scam.
The men, from Burnley, Lancashire, were found guilty after a trial at Manchester Minshull Street Crown Court of conspiracy to defraud and possession of an article for use in fraud.
Rezwan was jailed for six years, his brother five years.

The court was told the brothers ran North West Claims Centre Ltd, a Burnley company which managed insurance claims. They organised fraudulent claims following collisions deliberately caused by other members of an organised crime group, including Mohammed Patel who was jailed in 2009 for his part in the ‘cash for crash’ conspiracy.

The scam ensured that all of those involved would earn money at the expense of the other parties’ insurers.
In October 2008, Patel admitted being the driver more than 90 forced collisions between 2005 and 2008, all of which led to exaggerated and fraudulent insurance claims.

The claimants would earn compensation for personal injuries and Patel would earn a fee for driving the cars. The biggest profit, however, went to North West Claims, who processed the claims.
Rezwan and Rehan Javed came to the attention of Operation Contact after investigating the actions of Patel, who was later proved to be the same driver in an alarming number of collisions at the Eden Point roundabout on the A34 in Cheadle and at other locations.

After police searched Patel’s house, they found a number of pieces of paper containing the third party details of people involved in collisions. Claim files seized from North West Claims related to these details.

Further evidence came to light about the Javed brothers’ involvement in the claims. Documentation for credit hire, personal injury examinations, and the recovery and storage of cars all suggested that both Rezwan and Rehan Javed had detailed knowledge.

The company used the same engineer to examine the cars involved in the collisions. To back up the claims, reports from the engineer exaggerated and in some cases made up the damage that was caused.

Sergeant Mark Beales, of the Road Crime Unit, who has led Operation Contact, said: “It is clear the Javeds profited significantly from this crime. They made a living from the scam.

“This was a highly organised criminal enterprise under the guise of legitimacy. The company was registered under the terms of the Ministry of Justice, they had a visible business premises in Burnley, and yet this was all a front for fraud.