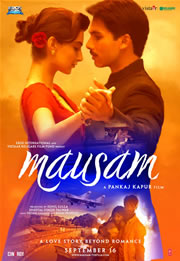 FILM: Mausam
DIRECTOR: Pankaj Kapoor
CAST: Shahid, Sonam Kapoor, Supriya Pathak
The Indian Air Force forms the backdrop for this endearing love triangle spanning over 12 years depicting an adolescent and a mature love story between two individuals from two different religious backgrounds.
Shahid Kapoor stars as a fighter pilot whilst Sonam Kapoor plays a Kashmiri girl named Aayat. Aditi Sharma who starred in Subhash Ghai’s film, Black and White plays Shahid’s first love but his affection towards Aayat increases as the story unfolds.
Shahid’s father Pankaj Kapoor makes his directorial debut with this film that goes back to the 90s. It’s taken Kapoor three years with script planning. The film showcases Shahid in four different looks corresponding to the four seasons of the year.
Prior to the film’s shooting, Shahid had to get under the skin of his character of a lonely lover boy. To prepare for this role, Shahid used to go on long bike rides to understand the solitude of his on-screen character.
Being his own dad’s film, Shahid took full responsibility of the film’s production besides being the main lead star of Mausam.
The shooting in Mumbai was halted for two days when Shahid injured his hand after falling off from a giant wheel. But he was back on his feet flying the F-16 Super Viper at the Aero show in Bangalore which form part of the filming.
Mausam is set in Kashmir but due to security reasons it has been shot in Edinburgh, Scotland at one of their Tornado fighter jet air bases. Other locales include Delhi, Punjab, Mumbai and Ahmedabad.
Releasing by EROS International Mausam is predicted to be this year’s highest grossing films at the UK box office due to its romantic content with a mass family appeal. Not to be missed!