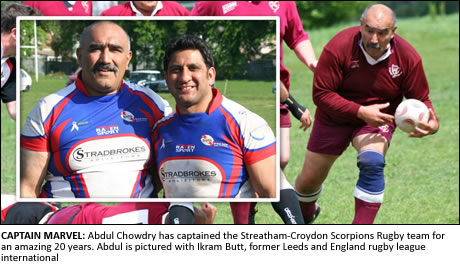 THEY say it’s good to stay on top of your game and for one Rugby devotee that rings truer than ever.
Abdul Chowdry will celebrate a milestone next month when he takes to the field for the Streatham-Croydon Scorpions Rugby team. The forthcoming season will mark an amazing twentieth year as captain for Abdul.
The veteran 57-year-old prop has captained the side since the early nineties and will be using all of his experience to inspire his players to continue the good form the side showed in 2010-2011.
The Scorpions is a mix of veterans coming towards the end of their careers and younger players learning the game. The older guys are able to guide the younger players and help them develop their core skills in a match situation.
Chowdry plays a key role in this, and has brought countless young players through the Scorpions. It helps that he is also a teacher at Thomas More School in Croydon, where a number of pupils have played for the club. Several of the current title-winning Streatham-Croydon first team have played for Abdul’s men.
At 57, Chowdry shows no signs of slowing down. “To be honest I’m not completely sure when my first season as captain was,” said Chowdry, “The only way I have of measuring it is that players who I used to teach have now grown up and had children of their own who have in turn played for us.
“Being captain guarantees me a place in the side. Who else would pick a 57-year old prop?”
Assistant Coach and fellow Scorpion Steve Tillin disagrees, “Abdul had one of his best seasons for us last year. He’s been playing the game for so long that he always seems to be popping up in the right places. The way he is playing he’ll be able to go on for a few years yet.”
Owen Jones, Streatham-Croydon’s Press Officer explained, “Abdul’s team talks always stress the importance of teamwork for the success of the team. He reminds his team that if they play as a team they will enjoy the game more and are more likely to win. He encourages players to support each other all over the park.”
After last season’s fourth place in the league Chowdry will be looking for another successful season, particularly as the club has strengthened its player base over the summer. “We’ll be looking to win our division this year – only a couple of results went against us last year that had we won we would have been right up there.”

If you want to play for Abdul this season or any of our other teams contact Streatham-Croydon’s coaches at scrfccoach@gmail.com or visit www.scrfc.co.uk 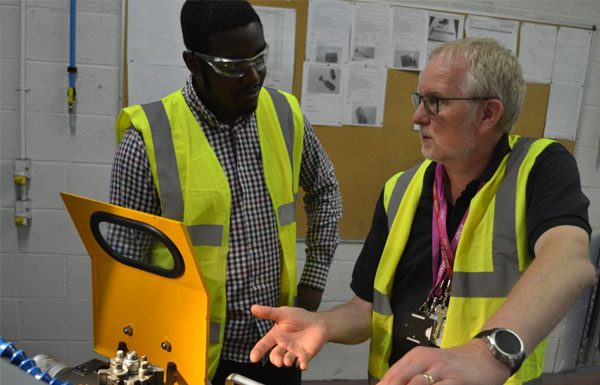 South & City College invests in engineering for the future

Pandas Brought Back From Edge of Extinction

The GQ Awards Winners Are Out!