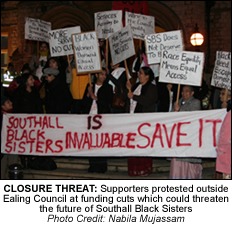 A NUMBER of women demonstrated outside the headquarters of Ealing Council in protest at their decision to cut vital funding for one of the country’s most influential Asian refuges.
Supporters of Southall Black Sisters demonstrated outside the council’s headquarters after bosses made a decision not to renew the groups funding.
The future of the group now looks in doubt – much to the anger of its thousands of supporters across the country.
For more than two decades the group has been at the forefront of challenging domestic and gender violence locally and nationally, and campaigning for the provision of support services to enable women and their children to escape violent relationships.
The refuge survives heavily on annual funding of £100,000 from the council but they will receive nothing from April following the council’s decision.
Ealing Council have argued there is no need for specialist services for black and minority women and that services to abused women in the borough need to be streamlined.
But Pragna Patel coordinator for Southall Black Sisters hit out at the decision saying it would leave black and Asian women in need of the service with nowhere to go.
“Their view fails to take account of the unequal social, economic and cultural context which makes it difficult, if not impossible, for black and minority women to access outside help or seek information about their rights,” she said.
“In effect the council proposes to take away essential life saving services provided by SBS. Ealing council suggests that we either extend our service to cover the needs of all women in the borough or that we set up a consortium of groups to provide such a service for the same sum of money.
“The amount of funds available to the voluntary sector in Ealing has shrunk year in, year out, but the withdrawal of funds to SBS will have a number of far reaching consequences.”
She added if the organisation is forced to redress the way it operates provisions for Black and Asian women would be drastically cut.
“The attempt to compel us to meet the needs of all women will mean that we will have to reduce our services to black and minority women across London and the country,” she added.
“Abused black and minority women, who already face considerable racism, discrimination and cultural pressures, will no longer have access to a specialist service.”
Ironically deputy prime minister Harriet Harman praised the work of Southall Black Sisters in a speech at the Houses of Commons last July stating support for Asian women was a vital area for the government.
But the fight for survival is not an individual battle for Southall Black Sisters.
Across the country a number of BME refuges are threatened with closure.
Last month Imkaan – an advocacy group for a network of refuges for BME women and children experiencing domestic violence – launched a report hitting out at local authority commissioning which they say is squeezing out specialist services.
Amrit Wilson, Chair of Imkaan accused the government of starving vital resources for BME women through its own policies.
She said”: “‘Honour killings has become a coded reference which instantly demonises certain communities. And while criminal justice experts detail gruesome stories and whip up moral panics based on “estimated numbers of cases”, the routes to safety for women facing violence are being closed off by the government’s own policies.
“Policies introduced under the Supporting People (SP) housing programme are “decommissioning” black, Asian, minority ethnic and refugee (BAMER) women’s refuges, slashing the funds of others and abolishing outreach and advocacy services which are lifelines for the many women and children trapped in violent relationships.”
Imkaan has launched a campaign against these policies and is calling on the government to increase funding for BME services.