Be a Winner with The Asian Today! 3 copies to giveaway 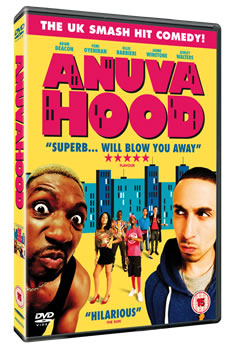 FANCY getting your hands on a copy of the hit Brit comedy ANUVAHOOD?
Thought so! From the mind of Adam Deacon comes the UK’s first hilarious urban comedy, with a big cast including Femi Oyeniran, Jaime Winstone, Ollie Barbieri, Richard Blackwood & Ashley Walters, and featuring hot tunes from Tinie Tempah, Boy Better Know, Wiley and Dizzee Rascal.
Available to own on DVD from the 4th July re-live one of the years biggest films.
Meet Kenneth (Adam Deacon). He thinks he’s got the moves. He thinks he’s got the swagger. He thinks he can spit bars. But in reality, he’s a WASTEMAN!

With the bailiffs banging on the door, parents screaming in his ear, and finding no luck with the ladies, he needs to FIX UP, and fast.

When our boy starts selling weed to get himself out of trouble, local badman Tyrone is VEX, opening up a world of hurt  for Kenneth and his misfit crew. But he ain’t gonna go down without a fight. It’s time for him to get rich, or CRY TRYING!

This ain’t just any hood, it’s ANUVAHOOD!
The Asian Today has teamed up with Revolver Entertainment to offer three lucky readers the chance to get their hands on a copy of Anuvahood. But you won’t be getting any old DVD – we’ve got copies SIGNED by stars of the movie ADAM DEACON and PORTIA FRENO!
To be in with a chance of winning just answer the following question:

What is the name of Adam Deacon’s character in ANUVAHOOD?

Is it:
A) Kenneth
B) Bookie
C) TJ
E-mail your answer along with your name and address to competitions@theasiantoday.com before 31st July 2011
Only one entry per household. Winners will be chosen at random and notified by e-mail.
Anuvahood out now on DVD and Blu-Ray!