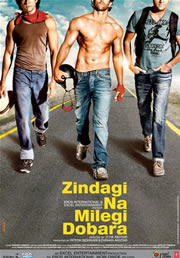 Film: Zindagi Na Milegi Dobara
Cast: Hrithik Roshan, Farhan Akhtar, Abhay Deol, Katrina Kaif
Newly engaged Kabir wants to go on an extended bachelor party – a three week road trip with his two best friends Imraan and Arjun.
So after much persuasion the boys set off on a fantasy holiday they had planned to take after college but never happened. It’s a road trip where each one gets to do the ultimate sport of his choice and the other two just have to do it with him whether they want to or not!
All three meet up in Barcelona and set off on an adventure that will not only iron out their differences but also face their inner fears, alter their insight to break out of their comfort zones. They soon realise that this holiday is about to change their lives forever.
Zindagi Na Milegi Dobara truly promises to deviate from traditional Bollywood norms. The movie bares much resemblance to Dil Chahta Hai by focusing on urban youths in modern day India. Adding a refreshing feel, audiences can look forward to the spectacular ‘Running Of The Bulls’ festival in Pamplona, Spain. What’s more the director has also included another popular Spanish custom – the tomato hurling match! Meanwhile Hrithik Roshan and Katrina Kaif are poised to become the hottest on-screen couple after this release due to their electrifying chemistry.
And as if that’s not enough Hrithik, Farhan and Abhay have sung a song composed by Shankar-Ehsaan-Loy which is already making waves on the music charts. With so much going for this youth orientated drama, audiences will definitely flock into cinemas to see this movie dobara!