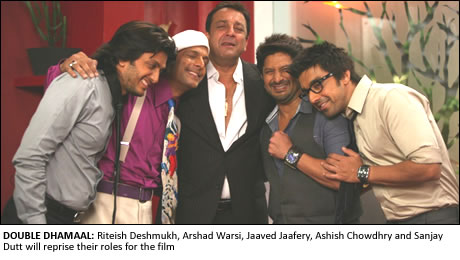 FOUR years on from when they first caused a comedic riot on cinema screens, the four jokers reunite to give audiences a much anticipated, follow-up dose of ‘Double Dhamaal’.
Set to cause madcap mayhem in cinemas across UK and worldwide, ‘Double Dhamaal’ is released by Reliance Pictures on 24th June 2011.
Reopening the stitches of laughter from the first time around, much-loved director Indra Kumar presents comedy kingpins Riteish Deshmukh, Arshad Warsi, Jaaved Jaafery and Ashish Chowdhry, as they reprise their roles and reunite to cause havoc once more for moody cop, Sanjay Dutt. With jaw-dropping beauty added to the mix courtesy of screen vixen Mallika Sherawat and dazzling damsel Kangna Ranaut, temperatures will soar this summer as ‘Double Dhamaal’ spreads an epidemic of laughter across cinema theatres.
The rollercoaster film ride is complemented by an equally infectious soundtrack of peppy numbers by composer, Anand Raj Anand ensuring audiences will emerge with a smile on their faces and a hum on their lips.