Home News Police ‘did all they could’ in mum death 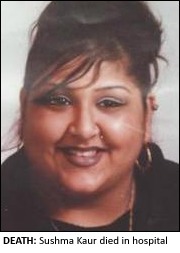 POLICE officers who waited 16 minutes to gain access into a room where a woman had collapsed after suffering an epileptic fit are not to blame for her death, the police watchdog has said.
Sushma Kaur, 25, died after being rushed to King George Hospital on 23 January 2009.
Police were called to her home in Ilford by a neighbour after being alerted by Mrs Kaur’s nine-year-old son.
Officers waited 16 minutes to gain access to the locked bathroom after waiting for specialist equipment to arrive.
An inquest into her death in February 2010 heard evidence from a Consultant Neurologist who said Mrs Kaur would still be alive had officers broken down the door when they arrived.
But the Independent Police Complaints Commission (IPCC) disagreed saying officers “did all they could.”
Mrs Kaur had been given a preliminary diagnosis of epilepsy, following several incidents of losing consciousness, and had arranged with her neighbour that she would call for assistance if required.
On 23 January 2009 Mrs Kaur’s son alerted the neighbour that his mother was in a locked toilet and had collapsed. The neighbour went to the house, banged on the toilet door and tried to push it inwards but could not open it.  She dialled 999 at 4.47pm and requested the police and an ambulance, telling the police operator she needed someone to get the door open.
However, when officers arrived, they were unable to open the door until specialist equipment arrived at 5.10pm.
The IPCC said before the specialist equipment arrived three officers had attempted to open the door as well as looking for other ways of accessing the room.
An Emergency Medical Technician for London Ambulance Service also tried kicking the door without success.
IPCC Commissioner Rachel Cerfontyne said: “This is a very sad case, which must have been incredibly traumatic for Sushma’s son and the rest of her family and it is important that the actions of the officers involved were thoroughly scrutinised.
“From the evidence available, which includes testimony from independent witnesses, it appears that the officers in this case did everything possible to open the door as quickly as they could in the circumstances and should be commended for their commitment, despite the tragic outcome.”