Actress talks about her forthcoming film Love You Mr. Kalakaar 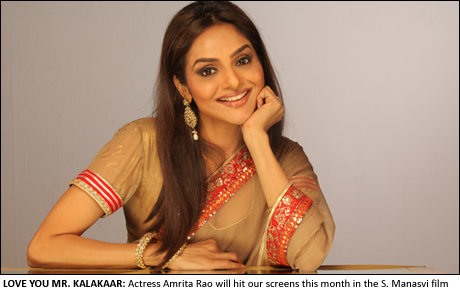 WHEN she arrived in tinsel town, it was her earthly, girl-next-door looks which charmed Bollywood biggies and cine-buffs alike.
But it was Sooraj Barjatya who used Amrita Rao’s simple charm to deadly effect in Vivah. And sure enough, the super hit Rajshri film catapulted her career to greater heights.
The dusky charmer is now back with the same team, with their latest film, Love You Mr. Kalakaar, directed by S. Manasvi. In this modern, effervescent love story helmed by debutant director Manasvi, Amrita plays a management trainee in love with an artist, played by Tusshar Kapoor.
Ever since your debut, you’ve been winning awards almost consistently. What do you think is the reason behind it?
Well, the fact is that I got some striking roles in very well made films. They were successful precisely because they were good films. The characters I played had been defined clearly, which made it easier for me to portray them. People could identify with the characters. And luckily, both the audience and the people in the industry appreciated my work.
You have worked with directors like Sooraj Barjatya, Shyam Benegal and Raj Kumar Santoshi on one hand and on the other hand the likes of Farah Khan, Ken Ghosh. Is this variety of directors a conscious choice?
No. I think an actor cannot really be choosey here, especially if you have no ‘Godfather’ or mentor backing you. The directors you mentioned approached me because they thought I could do justice to that particular role. The only things important for me in a film are the script, the role I’m going to play, my comfort level while working in the film and if I can do it without any compromises.
You have this image of a sweet-girl-next-door. Are you comfortable with this image?
Honestly, I’d prefer to be known as the girl-next-door all my life. I would rather be seen as this simple, attractive girl who is smart, a go-getter and can also be the life of a party, rather than someone who is highly glamorous but snobbish and boring.
Don’t you think this image limits the kind of roles you get?
On the contrary, it is precisely due to this image that I’ve got the opportunity to work with so many different directors whom you mentioned earlier.
Are you playing this same simple girl in Rajshri Productions’ Love You Mr. Kalakaar too?
I am playing what you call the girl-next-door, but this character is radically different from, say, my character in Vivah which was also a Rajshri film. In that, my role was that of a subservient, self-sacrificing girl, but one who had a great inner strength. But in Love You Mr. Kalakaar, I play a management trainee – a girl who could be from some reputed college in Mumbai – who has a strong personality, is a go-getter, and wants to make it big in the corporate world. This girl has a mind of her own.
How does it feel to be back with the team that gave you such a big hit with Vivah?
Oh it was great to be back with Soorajji and the entire Rajshri team. There is so much warmth, mutual respect and bonhomie on their sets that you don’t feel as if you working. It feels more like a picnic. It’s the kind of atmosphere that you would want to come to everyday.
This is the first time that you have worked with Tusshar Kapoor. How do you find him as an actor and a co-star?
I’ve noticed that Tusshar has really evolved as an actor. In fact, while we shooting together, I happened to see his film Golmaal. And his performance in the film left me completely stunned. This character I was watching was exactly the opposite of the dreamy, laid-back and restrained character I was meeting everyday on our set. This contrast fascinated me. I complimented Tusshar after watching the film, when we met again on the sets of Love You Mr. Kalakaar.
How was it working with Manasvi who has made his directorial debut with Love You Mr. Kalakaar?
It was the first time that I worked with a crew full of young people. It was a fun experience. Manasvi came across to me as a person who knows exactly what he wants. He is very passionate about his work. And what I liked most about him was that he gave all of us a lot of creative freedom while enacting our roles. And though he was always open to suggestions, he knows when to say no.
You have some scenes with actress Madhoo, who plays your aunt in the film. How was the experience of working with her?
It was fascinating to know that here was actress who quit at the peak of her career because she was not getting roles to her satisfaction. And it was equally amazing to see her come back to work after 10 years with the same child-like enthusiasm and excitement. Looking at Madhooji, I wondered about what I would be doing 10 years down the line. She was an inspiration for all of us.
Is it true that you will be doing another Rajshri film after this? Could you tell us about the project?
Yes, but I can’t tell you much it is all in the very initial stages. There are some other films in the pipeline too but things have not crystallized as yet.
Love You Mr. Kalakaar is on general release on 13th May 2011