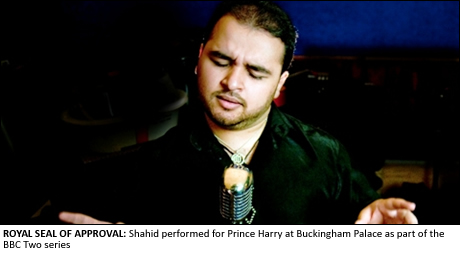 NOT many singers can boast of an audience with royalty – unless you’re Shahid Khan!
The 24-year-old Brit Asian music sensation was part of the BBC series Goldie’s Band-‘By Royal Appointment’ in which he performed for Prince Harry at Buckingham Palace.
The show made Londoner Shahid an overnight sensation and now he’s ready to conquer the British Asian music scene with his debut eight-track album ‘Heartfelt’.
The first release, ‘Oh Kuri’ is a Bhangra Latina inspired track, co-produced by the acclaimed salsa producer Alex Wilson.
The album also features a Bollywood remix of the legendary song ‘Ain’t No Sunshine’ by Bill Withers.
British Bhangra pioneer Kuljit Bhamra MBE believes Shahid – who also plays the harmonium and tabla – represents a “new breed of “British Asian singers.
It was Kuljit himself who first spotted Southall-based Shahid in a local Asian Star search Talent competition over eight years ago.
Kuljit, who has worked with ‘My Hips Don’t Lie’ Columbian singer Shakira and British girl band Sugababes, recognised Shahid’s talent from an early age and has since gone on to mentor Shahid and produce his debut album.
“Shahid Khan is one of the UK’s hottest new talents and is most importantly offering something different and undeniably unique to listeners,” Kuljit says.
“He represents a new breed of a young classic singer voice whose sound is closest to Nusrat Fateh Ali Khan and Adnan Sami. It is great that we have a new British Asian sound that appeals to first and second generation Asian communities as well as mainstream audiences.”
Kuljit may have seen the sparkle in Shahid all those years ago, but for the rest of us it was the recent BBC show ‘Goldie’s Band-‘By Royal Appointment’ that brought Shahid to the fore.
The programme followed electronic music artist Goldie on a mission to discover young people whose talent and passion for music was at the centre of their lives.
After a nationwide search, twelve young musicians were mentored by a team of industry experts including composer Guy Chambers, jazz artist Soweto Kinch and singer songwriter Cerys Matthews.
Shahid was one of 12 selected to perform in front of Prince Harry at Buckingham Palace.
“Working with Goldie was an amazing and surreal experience,” Shahid says.
“His influence and knowledge really helped me and working with other artists has been such a great collaborative experience.
“Talent Competitions have always been a great way for me to get recognised and I was honoured when I was selected to perform in front of His Royal Highness Prince Harry at Buckingham Palace. He seemed to enjoy the sound we had created.”
As well as his debut album, Shahid and eleven other members of ‘Goldie’s Band-‘By Royal Appointment’ have united to form their own band 12LVE and are hoping to record an album and embark on a tour.
The future really is looking bright for Shahid!
Heartfelt by Shahid Khan is available to buy from www.amazon.co.uk or www.keda.co.uk