Hussein Lalani hands out family recipes on back of cooking sauces 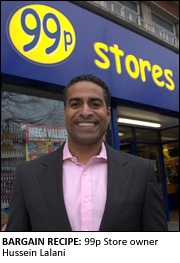 RECESSION busting entrepreneur Hussein Lalani wants to ‘wow’ his customers by putting family recipes on the back of sauce bottles sold across his 99p Stores empire.
The value retailer has introduced Lalani secret family customised recipes on its own brand Soya and Chilli sauces at selected stores from its 143 UK branch portfolio.
Owner Hussein Lalani say’s it’s all about pushing the boundaries of “value” to “wow” levels.
“We now have weekly conferences where we ask HOW we can WOW our near two million family of customers,” Mr Lalani say’s.
The retail chain is owned by the Lalani family who opened their first 99p Stores in 2001 as a one-man band in Holloway, North London and in little over a decade have created a national brand. It is growing monthly with more stores planned soon, including in Colchester and Bishops Stortford.
At present there are 143 UK branches of the value retailer.
On the back of one sauce is the ‘Lalani Chicken with Ginger and Spring Onion’ recipe.
The recipes are on many bottles including Soy Sauce and Sweet Chilli Sauce.
They are being rolled out at selected 99p Stores 143 UK branches.
99p Stores has more than 8,000 different product lines, many of which will change weekly.
Products range from baby-wear to biscuits, cosmetics to chilled products, food to fashion, gardening to gifts, pet-care to party-wear, stationery to sweets – and lots more. 99p Stores pride itself on being the ABC of retail stores.
As well as general products 99p Stores also stocks themed goods – it’s Father’s Day range are just going on shop shelves.
“Grabbing a bargain – and ensuring value – has become part of the daily shopping experience in Britain today,” adds Mr Lalani.
Around 1.75m Britons now shop weekly at 99p Stores.