British champ gets ‘Fight of the Year’ accolade 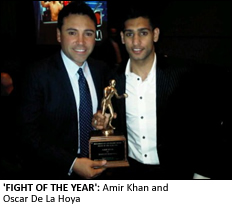 AMIR Khan was in Las Vegas to pick up the Boxing Writers Association of America award for 2010 ‘Fight of the Year’ after his epic battle with Argentine bruiser Marcos Maidana.
Both Khan and Maidana put on a show that enthralled fight fans last December, with the Bolton ace winning through by a unanimous points decision.
The WBA light-welterweight world champion was joined by his trainer Freddie Roach, who picked up the ‘Trainer of the Year’ award for a record 5th time, and his promoter Oscar De La Hoya.
Sergio Martinez claimed the ‘Fighter of the Year’ award after he won the world middleweight title from Kelly Pavlik, then successfully defended it with a sensational one-punch knockout of Paul Williams.
Khan was delighted to be at the dinner and win his award: “It was a great battle between two warriors and I’m sure it will go down as one of my defining fights. I knew Maidana would be a very tough opponent but in the end I managed to see him off and claim the victory. It’s great to be in Las Vegas for this dinner and be recognised by boxing’s best writers.”

We can win it

Past, I penned a post devoted to highlighting some of this present year’s nonfiction...