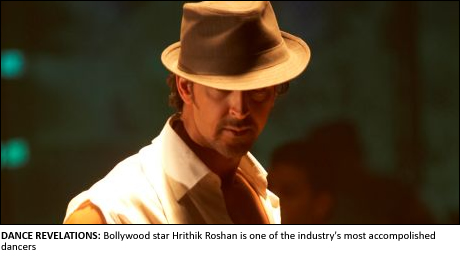 BOLLYWOOD star Hrithik Roshan has revealed he rehearses his dance steps in his sleep.
The actor, one of Bollywood’s most accomplished dancers, admits to “Putting in relentless hours of rehearsals” to create those iconic and effortless moves on screen.
The revelations have come about as the actor, who is reprising Amitabh Bachchan’s legendary role in Karan Johar’s ‘Agneepath’ remake, has been quietly rehearsing for a song sequence in the film.
The ‘Just Dance’ judge says that he is unable to perform a move without imagining it first. “Along with rehearsals, I actually learn dancing in my sleep.  If I can clearly see every moment of the move in my head, then my body is able to express it,” says Hrithik.
Karan Johar has gone on to praise Hrithik for being a “Relentless rehearsal man, exhausting hours which result in effortless moves – that’s Hrithik for you.  He raises the bar of excellence and validates the input equals output theory!”
This isn’t the first time that Karan has seen such dedication and passion in Hrithik’s approach to dance, as he recalls a previous experience whilst directing the actor in megahit, ‘Kabhi Khushi Kabhie Ghum’: “We had two hours to shoot at the British Museum. Hrithik was given an elaborate dance piece that could have thrown anyone off, even internationally, but he worked through the night and came straight to the shoot.  It took just one take and we were done and out of there!”
To see Hrithik’s skills in action, make sure to look out for the highly anticipated Agneepath, due for release in December 2011.