Shrien Dewani to appear at City of Westminster Magistrates’ Court 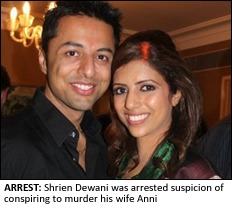 THE husband of a woman murdered in South Africa has been arrested in the UK.
Shrien Dewani, 30, was arrested by officers from the Metropolitan Police Service’s Extradition Unit on behalf of the South African authorities.
His wife Anni Dewani, 28, from Sweden, was shot after being kidnapped while in a taxi with her husband last month.
Police said Mr Dewani surrendered himself at a Bristol police station on Tuesday and was arrested on suspicion of conspiring to murder his wife.
The arrest comes after the couple’s taxi driver Zola Tongo claimed he was offered 15,000 rand by Mr Dewani to kill his wife.
Tongo was sentenced to 18 years in jail after agreeing a plea bargain.
He was charged with murder, kidnapping, robbery with aggravating circumstances and perverting the course of justice.
Two other people, Xolile Mnguni, 23, and Mziwamadoda Qwabe, 25, face charges of murder, aggravated robbery and kidnapping.
Mr Dewani is due to appear in custody at City of Westminster Magistrates’ Court later today.