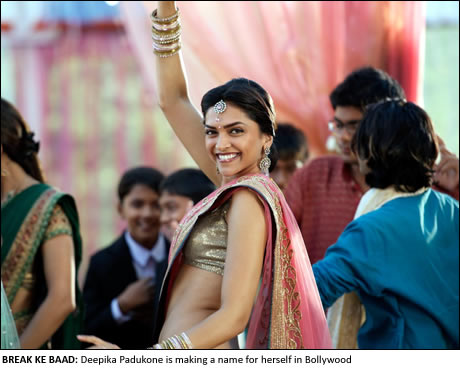 AFTER the dream debut exactly three years back, actress Deepika Padukone seems to have finally hit her stride in Bollywood in 2010. Bollywood Correspondent Supriya Davda caught up with the model-turned-actor and spoke to her about her forthcoming film Break Ke Baad.
Welcome to London Deepika, what do you most like about London?
Thank you, I love London. If there was one place apart from India id like to settle down in, it would be London.
How would you describe Break Be Baad?
Break Ke Baad is about relationships in today’s day and age and about how two people are together, yet so different. The film also describes how a break up can be a healthy step to take in order to help it work.
Give us a feel about your character?
The name of my character is Aaliya she wants to become an actor, she wants a lot for herself. My character is so career driven and takes precedence over her relationship. At the same time she comes across very cynical she doesn’t believe in love, she doesn’t believe in marriage.
So would you say you’re similar to Aaliya at all?
In many ways I am similar to her and in a lot of ways no. Aaliya is highly ambitious and wants to achieve a lot for herself, which I most definitely identify with. But she is also someone who sacrifices her relationship, and doesn’t believe in love or marriage, and those are things I don’t connect with.
Having acted in romantic hits like Bachna Ae Haseeno and Love Aaj Kal; you are back with Break Ke Baad. Don’t you think you’ll be compartmentalised as an actress?
I don’t want to be stereotyped solely as a romantic heroine or be compartmentalised as you said. Which is why with Karthik Calling Karthik [physiological thriller] and my upcoming release Khelenge Hum Jee Jaan Se [historic] I have experimented with the type of films that I do. But yes, I won’t deny that romantic love stories or romantic comedies are what I enjoy doing the most, because as an audience those are the kind of films that I like watching.
How do you go about choosing your films?
There is no particular formula to this, I think it depends on my gut instinct at the time and what I like doing at that particular point in time. If I like the script and the character that’s been offered I take on the film. I think it’s also important that you enjoy working with the team.
And what are your thoughts on the music of the film?
It’s nice. There are a couple of songs I like. There’s a song called ‘Dooriyan’ which actually talks about how space in a relationship is important. There is another track ‘Dhoop Ke Makaan’ which is a slightly sad love song, which I really like, but at the same time it is not one of those typically slow love songs. It is the kind of music that I think everyone likes listening to these days.
Having spoken to Imran earlier, he said you all had a blast in Mauritius…
Yes we did, besides work we partied a lot. I also completed my scuba diving!
After the release of Break Ke Baad audiences will see you in a different light with Ashutosh Gowariker’s Khelenge Hum Jee Jaan Se.

Yes, a week after Break Ke Baad I have Khelein Hum Jee Jaan Sey coming out on December 3rd, where I play a very different de-glam role called Kalpana Datta.
What’s next for you?
Well there are few projects; in fact I will be back in London with Akshay Kumar and John Abraham to shoot Desi Boyz.
What about Race 2?
Yes I am doing Race 2. We will start shooting mid 2011.
Break Ke Baad releases is on general release now