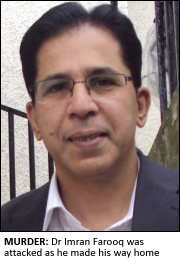 DETECTIVES investigating the murder of an exiled Pakistani politician have released an e-fit of a man they want to speak to in connection with the attack in Edgware.

Dr Imran Farooq, aged 50, was on his way home from work when he was attacked in Green Lane on Thursday, 16 September.

He was found suffering from stab wounds and head injuries.

A post mortem examination gave cause of death as multiple stab wounds and blunt trauma to the head.

Detectives recovered a five and a half inch bladed kitchen knife and a house brick which were used in the attack on Dr Farooq.

They said they retained “an open mind” as to the motive behind the killing.

He was wearing a dark coloured baseball-style cap.

Police also want to trace a second Asian man in connection with the attack. He is aged in his 30s, of stocky build, 5ft 9ins – 5ft 11ins tall, with short black hair.

Just days after the murder Dr Farooq’s widow Shumaila Imran made a personal appeal for help in catching those responsible for the attack.

She described her husband as a “dedicated family man, a loving father and loving husband,” adding the killing had “devastated” her family. 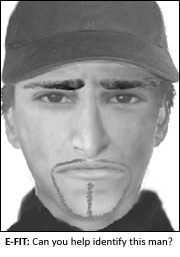 “Dr Imran Farooq was a dedicated family man, a loving father and loving husband,” she said.

“His murder a week ago has devastated me and left our family in a state of shock and disbelief. My husband was on his way home from work when he was set upon and attacked.

“Someone, somewhere knows something about my husband’s murder.”
It is vitally important that anyone with information should contact the police incident room on 020 8721 3784 or alternatively contact Crimestoppers on 0800 555 111