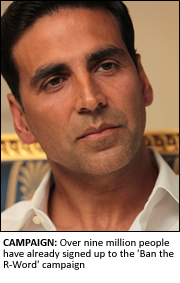 MILLIONS of people have backed a campaign to ban the word ‘retard’.
The campaign was started by Bollywood actor Akshay Kumar following comments by American actress Jennifer Aniston in August where she refereed to herself as a ‘retard’ on chat show Live with Regis and Kelly.
Speaking at the time, Akshay said: “The recent incident involving Jennifer Aniston using the R word on live TV was, of course, blown out of proportion, but it just shows how unaware we are and how frivolously we use this word. One could never understand how much it hurts — it demeans people who strive harder in life than we could ever imagine.”
Now his campaign, ‘Ban the R-Word’ has received over nine million signatures just weeks into its launch.
Kumar says he wants to ensure that mentally and physically challenged individuals are recognised as equal members of society.
Fellow members of the Indian film fraternity, including Amitabh Bachchan and Salman Khan, have already shown their support to for the initiative.
“The campaign is not about being politically correct; it is about being sensitive,” Kumar said.
The ‘Ban the R Word’ signature campaign will culminate with a major event entitled ‘Be a Fan of Dignity’, taking place in Bangalore.
The show will see Akshay modelling outfits by local designer, Ramesh Dembla, on the runway.
The humanitarian actor will also award those people who have achieved new records for the campaign. So far, the highest amount of signatures – 98,000 – comes from a school in India.
After the event, all the signatures received will be handed to both the National Parliament and the Social Justice Department in Delhi, in a bid to ban the ‘R-Word’ from all languages spoken in India.
To join Akshay Kumar in the campaign to ban the ‘R’ Word, visit www.rwordindia.org