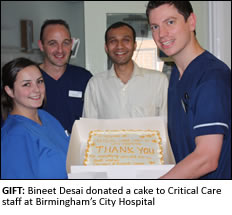 A GRATEFUL dad has said a big thank you to City Hospital after staff saved the life of both his newborn son and his mother-in-law.
Bineet Desai, from Great Barr, presented staff in Critical Care with a cake as a token of appreciation for nursing Devyani Desai, his mother-in-law, for almost seven weeks after she became ill on a trip to Birmingham from India to see her grandson for the first time.
“She fell ill the day before she was going home,” explained Bineet, who works as a trade advisor with UK Trade and Investment.
He added: “She was supposed to be returning to India, so she went to A&E at City Hospital and she was admitted to Critical Care for 47 days before being discharged.
“At one stage no one believed she would survive but the doctors did everything they could and she was treated so nicely.”
Devyani became ill with a various conditions, including respiratory and kidney failure, and medics said that if she had boarded the flight back to India she would not have survived.
Bineet’s baby boy, Sam, also contracted an infection five days after being born and was cared for in the Paediatric Assessment Unit in City and Sandwell hospitals.
He added: “All I can say is that all the words in all the languages in the world cannot say enough to say thank you. This hospital has given us two lives back – my baby and my mother-in-law – and we are most grateful.”
Bineet also said that his father-in-law has contacted his local MP in India with a request to formally write to the British Prime Minister to thank the NHS and City Hospital for saving the life of his mother-in-law and for the care she received.