Home Competitions Win a copy of The Infidel signed by Omid Djalili & David...

THIS COMPETITION IS NOW CLOSED: Congratulations to our winners Ajabpail Bains and Jamal Haneef 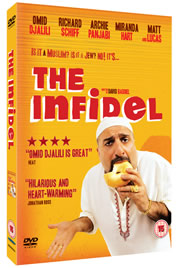 THIS summer sees the highly anticipated DVD and Blu-Ray release of the box office smash hit comedy, The Infidel.
The film’s original screenplay by writer and comedian David Baddiel received a fantastic public response during its cinema release in April earlier this year. The film makes its return with exclusive DVD and Blu-Ray extras, including never before seen backstage footage, Baddiel’s video diary and hilarious stand-up comedy from the world premiere at the Hammersmith Apollo in London
The Infidel stars British-Iranian actor and general ‘funny man’ Omid Djalili (The Mummy, Gladiator) as Muslim family man ‘Mahmud Nasir’, who is grappling with a life changing identity, crisis. Following the death of his mother, Mahmud is hit by a shock revelation when he discovers not only was he adopted at birth, but that he is Jewish, and his real name is Solly Shimshillewitz!
Film producer, Uzma Hasan, one of the only female Muslim film producers in the UK, says: “The Infidel is a comedy about a British family with a poignant message at the heart of it – in the midst of learning whether he is a Muslim or a Jew, what Mahmud finds is his humanity.”
The Infidel is available to purchase in stores and online on Blu-Ray and DVD from August 9th
Do you want to get your hands on a copy of The Infidel?
Two lucky winners will receive a copy of The Infidel DVD SIGNED by Omid Djalili and David Baddiel!
Question: “Who wrote the script for The Infidel?”
Is it:
A. Omid Djalili
B. David Baddiel
C. Ricky Gervais
E-mail your answer along with your name and full address to competitions@theasiantoday.com before August 27th 2010.
Winners will be chosen at random and notified by e-mail