Home Competitions Win a copy of Cash & Curry on DVD

THIS COMPETITION IS NOW CLOSED: Congratulations to our winners Aisha Arif, Babar Mushtaq and Iftiqar Hussain 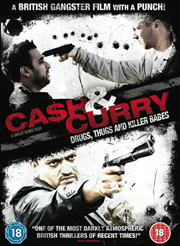 Welcome to multi-cultural London.
The Fascist UK Front are fed up with the immigrants ‘invading their country’. Added to their woes is the fact that London has been carved up between two rival drug lords – one black, the other Asian. This makes a mockery of the UK Front’s war cry: “Ain’t no black in the Union Jack!’
Meanwhile, Raj (Ameet Chana, Bend It Like Beckham) and his friends (Pooja Shah and Ronny Jhutti, Eastenders) are tired of being “errand boys” at the bottom of London’s criminal food chain. Desperate ambition leads Raj into a dangerous double-cross that lands them in the middle of a gang war between two of the biggest drug lords in London: Gabbar (Manish Patel, Triads, Yardies & Onion Bhajees) and Isaac.
To elude capture, Raj and his friends are forced to submerge themselves in farm life much to the dislike of the local racist skinhead who takes exception to this ‘multicultural invasion’ of the old English countryside!  Meanwhile Gabbar and Isaac dispatch various henchmen, including Tiny (Andrew ‘Tiny Iron’ Harrison, Dead Man Running) to track down Raj, the money and the drugs!
We have three DVD copies of Cash & Curry to giveaway.
To be in with a chance of winning, just answer this very simple question:
Question:
Who directed Cash & Curry?

Was it:
A) Sarjit Bains
B) Steven Spielberg
C) Peter Jackson
If you think you know, e-mail your answer along with your name and full address to competitions@theasiantoday.com before 27th August 2010.
Winners will be chosen at random and notified by e-mail