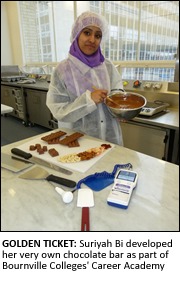 A BIRMINGHAM college student really did get her hands on golden ticket after getting a lifetime opportunity to create her own chocolate at the world famous Cadbury factory.
Suriyah Bi, 18, from Stechford spent four days at the chocolate factory as part of her BTEC Level 3 Extended Diploma in Applied Science course at Bournville College.
Suriyah was given the chance to learn the art of chocolate making as part of the college’s Career Academy.
She designed, developed and was the first to taste her very own chocolate bar ‘Wild Sensation’ developed for female audience.
The experience gave Suriyah an insight into complexity of chocolate making and its connection with many scientific principles.
She left Cadbury buzzing with excitement despite the fact that the chocolate bar would not be going to mass production. Suriyah said: “I was very surprised to see just how much science goes into the production of a chocolate bar.”
The Career Academy programmes are led by business charity Career Academies UK in partnership with a range of colleges, such as Bournville. The programme relies on support from businesses and employee volunteers. Cadbury is just one of the partners of Bournville College, supporting this programme which aims to raise aspirations of 16-18 year olds.
Kathryn Broome, Senior New Product Development Technologist at Cadbury’s who was guiding Suriyah during her visit, said: “This work placement is just one of many examples of Cadbury supporting our local community. Suriyah gained a valuable insight into the world of work whilst also experiencing the magic of creating her own chocolate bar.”