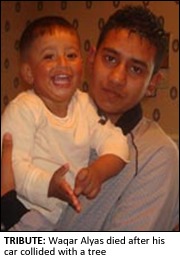 THE family of the teenager who died following a collision in Ashton have paid tribute.
Waqar Alyas, 17, from Oldham, died after the collision on Springwood Way in Ashton at about 1.50am on Friday 30 July 2010.

His brother Zahid paid the following tribute on behalf of the family: “Waqar was a very intelligent, kind and considerate young man.

“He was about to study his A-levels and had ambitions to be a dentist. He was very focused and ambitious.

“He was a keen footballer and was a Liverpool fan.

“He was very close to his family he will be missed by us and friends. His brothers will miss him.”

At 1.45am on Friday 30 July 2010, a police officer was on routine patrol on Ashton Road, Oldham when he attempted to stop a speeding Ford Focus that was being driven without its lights on.

As the car tried to turn from Oldham Road in Ashton into Springwood Way, it collided with a tree.

Police took Waqar out of the car as it was smoking.
Waqar was taken to hospital where he was later pronounced dead. A post-mortem examination to establish the cause of death is due to take place tomorrow, Saturday 31 July 2010.

In line with procedure, the driver of the police car was suspended from driving duties.

The matter has been referred to the Independent Police Complaints Commission by the Professional Standards Branch of GMP.