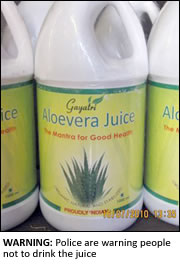 POLICE in Leicester are probing how a health drink came to be contaminated with horse tranquilliser after two women were rushed to hospital moments after drinking it.
Two women from the city developed a number of symptoms after drinking the Gayatri aloe vera drink.
Hospital tests have indicated they may have suffered from ketamine poisoning.
The powerful drug is used by veterinarians as a tranquilliser but can also be used on humans as an anaesthetic.
Police said forensic tests on the liquid were still being conducted and the final analysis of the liquid will not be known for some time.
They have recovered a number of bottles of the drink from retailers in the city and are urging anyone who possesses the drink to take it to a police station straight away.
One of the women, a 60-year-old Leicester grandmother, is still in hospital but is said to be recovering well after being in a coma.
Her daughter told the Leicester Mercury: “I thought she was going to die. My dad was crying as the paramedics were trying to revive her. It was awful.
“She was basically in a vegetative state. They thought she might have bleeding on the brain. I thought ‘that’s it’.”
A 45-year-old woman who was ill after drinking the juice was discharged from hospital on Sunday afternoon.
Detective Chief Inspector Chris Redfern is co-ordinating the investigation, he said: “At the present time it is too early to speculate about the cause and circumstances surrounding this incident. However a number of lines of enquiry are being completed to ensure that the potential risk of harm to other members of the public is reduced.
“Whilst we have an open mind about the outcome of the investigation, the safety of the public has been and continues to be at the forefront of action by the police and partner agencies.
“A huge team effort has taken place over the weekend to piece together what has taken place and to identify and reduce the chances of people suffering further harm.”