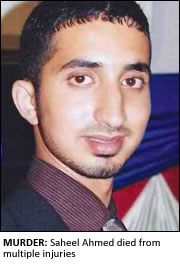 A 37 YEAR old man from Blackburn has been charged with the murder of another man in the town.
Naeem Majid Butt, of Johnston Street, was arrested in Edinburgh on Wednesday 7 July.
He was brought back to Lancashire and charged by Detectives with the murder of 24-year-old Saheel Ahmed.
An investigation was launched after Mr Ahmed’s body was found in an alley at the top of Warrington Street, Blackburn around 1.50am on Tuesday 22 June, after police were called to a report of a disturbance.
A post mortem revealed the cause of death to be multiple injuries. Mr Ahmed, who was from the town, had suffered a number of stab wounds consistent with the use of a bladed weapon.