Home Sports Watch out for Argentina

…says Bal Singh, one of the country’s most decorated football coaches 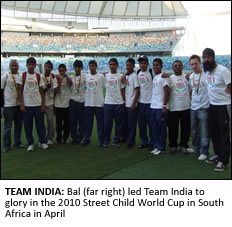 HE’S one of the most decorated Asian football coaches in the country…and he’s already led a team to footballing glory in South Africa.
Yes meet Bal Singh, the man behind the Khalsa Football Academy which was set up in 1988 to increase the participation of ethnic minority players in football.
In April Bal led Team India to victory at South Africa’s Moses Stadia as part of the 2010 Street Child World Cup, so who better than to given an insight into the FIFA World Cup…
We’re all looking forward to the World Cup next month – does it take over your life like it does everyone else?
It happens once every four years and I have a very supportive wife and family so I can watch any game I want anytime! Selecting the right games is important.
What’s your earliest World Cup memory?
Must have been 1982 – I became a fan of the defensive masters Italy. I tipped them to win in 1982 and was not surprised Cabrini, Conti , Graziani and Paolo Rossi and co knocked out Brazil and went on to win it.
The nation goes into a frenzy ahead of every major tournament convinced England will finally triumph on the big stage – do you think this could be England’s year?
It wouldn’t surprise me if they won it under Capello however…No. I have correctly predicted the winning nations since 1982 and before the qualifiers I predicted Argentina. For all the talk of systems of play and tactics the bottom line is there is 11 v 11 on the pitch and when you have Messi , Tevez and Mascherano and Sergio Agüero they will deliver. Argentinians have come good at the right time. Look at Inter the spine is Argentina players and some of them were unable to get into the squad.
We’ve got some good players – Wayne Rooney, Frank Lampard, Steven Gerrard – why do you think England have underachieved in the past?
Because the tournament has only been in England once and that helps. The brand of Football a nation plays is a huge factor and ball retention is so important at international level.
England had a great qualifying campaign – how much of the credit goes to Fabio Capello?
I wouldn’t say ‘great campaign’ apart from Croatia; it was an formality really! Now is the business end of the tournament. Capello is recalling players capable of winning the Champions League and playing in World Cups like Jamie Carragher. Fabio has implemented a discipline and I like the fact we not hearing about the “WAGS” – it becomes a farce otherwise. Lippi banned the wives and girlfriends and told the Italian players “You’re hereto win the World Cup for your country”. It’s the same under Capello definitely.
Do you have any concerns about the danger of England’s over reliance on Wayne Rooney up front?
I think players like Lampard, Gerrard , Crouch, Terry, (from set pieces) Defoe, Joe Cole are all capable.
Putting England to one side – who are the other teams that can pose a real threat to England?
Brazil, Argentina, France, Germany, Italy, Spain, Portugal.

6 useful information for matchmaking after separation. This will be very crucial that you understand if the self-respect was kept crippled by a loved...

Police Appealing After A Hit-and-Run

Inside Grindr�s First authentic television show �Bridesman� The queer hookup application gets into the...

Find the Best Payday and concept Loans in Miami, FL