Home Interviews ‘Big Brother is more than just a gameshow’

Interview: Davina McCall on the end of an era 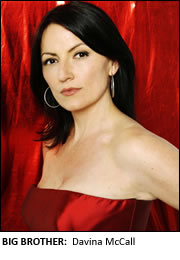 WHEN Big Brother first burst onto our screens in 2000, a young, enthusiastic presenter called Davina McCall was at the helm.
Ten years on and with the show approaching its curtain call, she’s still at the helm, still looks youthful, and is, if anything, more enthusiastic than ever. The Big Brother story has also been the Davina McCall story, the two inextricably linked from first to last. If life without Big Brother will seem strange, Big Brother without Davina would have been unthinkable.

Here, Davina looks back at the rollercoaster ride that kept a nation transfixed, was never short of controversy, and changed the face of television forever.

The last Big Brother is upon us! Going back ten years, what do you remember about the opening night of the first ever Big Brother?

I’ve been doing a lot of reminiscing and looking back – I’m full of nostalgia this year, looking back at everything that’s happened in all the past series. And I’ve been talking about series one. I don’t remember a huge amount. The first episode of the first ever series, I was just trying to do what the producer wanted me to do. The housemates had already been in the house for four days, so there was a little bit of a buzz about it, but I was too busy being petrified, I think, to really think about anything other than putting one foot in front of the other and trying not to swear.

At what point did you realise that what you were dealing with was really going to become a massive phenomenon?

I think pretty quickly. The buzz around the first few days got bigger and bigger and bigger. People loved the fact that this big press thing was brewing and the housemates were totally oblivious to it. There was something rather delicious about the fact that there were all these lovely housemates cocooned away from this huge furore that was happening on the outside. Looking back on the first series I think is hilarious now. Our housemates now think they get bored, but our housemates in the first series literally did nothing. They got one task a week, and that task had to last them the whole week. And that’s all they did. Our housemates now are up and at ’em from the moment they wake up. They must have gone nuts. Nowadays if that went on telly, people would think “Jesus, this is the most boring thing I’ve ever seen in my life!” But back then it was groundbreaking.

Big Brother has changed the face of television, but how has the show itself changed over the years?

I suppose it’s changed in a lot of different ways. One of the things I think is really clever is that Big Brother reserves the right to change the rules at any time, so Big Brother is forever morphing, even during a series. The right to change the rules means we can do anything we want. We can change the way housemates go in, we can change the way they come out, we can change the style of the exit interviews – we tried that last year, with a couple of extra people on the panel. We’re reverting back to just me and the housemate this year. The show has changed every series. But the main thing is they just do a lot more. There are a lot more tasks, a lot more housemates – there were only ten in the first series, and we can now have anything up to 15 or 20 going into the house over a series, with all the newbie’s and stuff like that. And we’ve gone to hell, we’ve gone back to basics, we’ve gone complicated again. I’ve never got bored – even in series 4, when everyone was like “This is so dull, everybody’s so nice!” For me, even in series 4 I was addicted.

You’ve said before that you’ve seen so much of Big Brother that you think you know how to win it. How would you go about it?

If I was a punter on Big Brother, first off, when I was doing my audition, I’d impress Big Brother within the first ten seconds. You’ve got to do something or say something or be different enough for them to say “Oh, you’re interesting.” It’s not good enough just to be kooky or weird, you have to be interesting. I always think they’re looking for multi-layered personalities. When you get in there, I would say hang back for the first couple of weeks. Hang back, get to know people, watch a little bit from the outside, let all the really big characters annoy everybody. I always think that the people who are really loud right at the beginning are the first out. I hate people who run around talking to the cameras all the time. I don’t want you to start having a commentary with Big Brother. Once in a blue moon this is appropriate, but not for joking or jesting. It’s not clever, it’s not funny, don’t do it. Secondly, don’t break the rules. Don’t tell people things from the outside world. Tim ‘Comprondez’ really upset me that year when he went in and told them straightaway what was happening in the World Cup – I couldn’t wait for him to be out, because it really annoyed me. And there’s a part of me that would say “Don’t be too much of a peacekeeper – if there’s a stonking argument going on, please don’t go in and just break it up, because I do quite enjoy watching something and see it resolve itself. There are people who can’t bear a cross word. Just let it happen. And the other really important thing is, use the diary room. A lot. Because we want to know how you’re feeling, and Big Brother wants to know how you’re feeling. You get a dynamic in the diary room – when someone’s looking down the lens, you feel connected to that housemate. And the public need to feel connected to you if you’re going to win it. And have a reason to be in there, rather than just being a wannabe. Like, I loved Nadia’s reason for being in there.

Wow. You’ve really thought about how to win it, haven’t you?

I’ve had a lot of time to think about it!

Do you ever get nervous before eviction nights?

Always. I always get nervous, because it’s live, and things go wrong. Or the dress run might have gone on too long and we might not have much time and we’ve only got 45 minutes to do hair and make up and get dressed and go live. But it’s never nerves that are crippling. Now, literally the moment I open my mouth I’m in it and I’m enjoying it. Those nerves go after I’ve said “Welcome to Big Brother.” Or, actually, they go when I hear the music, and I get excited and start pogo-ing on a stage, with everyone else in the audience all jumping around.

Looking back over a decade of Big Brother, is there anything you’d do differently? Any interviews you’d change, any questions you’d ask, any outfits you wouldn’t have worn, anything at all?

There’s one thing that I said to Katia at the end of her interview that I feel a bit bad about. She said “You wanted to go in and change people’s perception of you. Do you think you’ve done that?” And she said “Oh, I don’t care,” or whatever, and I got annoyed, and I went “Well, you didn’t.” And that was mean. It was my own personal feelings, and she’s not a bad girl, and she’s a young girl, and I left, and I thought “That was a bit mean.” I’m not in the business of being mean – I want to get the best out of people, I want to get the truth out of people, I want people to reveal things about themselves, but I don’t want to be mean. And I haven’t watched Makosi’s interview back, but there was a bit of a furore about me being mean to her. When I left that interview, I thought she’d behaved worse than I had, but if I was mean to her as well I apologise for that. And one last regret – that the Kinga bottle incident ever made it to air.

How has Big Brother changed your life?

Oh God. Big Brother has been the biggest godsend for me and my career. It’s made me, in my work. I have also presented a couple of turkeys in my time that I have been presenting Big Brother, and going back to Big Brother has always made the nation forgive me quite quickly, and I’m so grateful for that. And I’ve made some lifelong friends, who I’ll be friends with forever. God, it’s so much more than a gameshow!