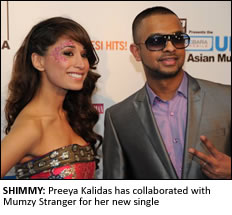 AFTER her dramatic departure from Eastenders, Preeya Kalidas, known to millions as the loveable ‘Amira’ from Eastenders is gearing up for the release her new track ‘Shimmy’.
The song features Brit star Mumzy Stranger, described as the UK’s answer to Sean Paul, and has been remixed by Rishi Rich, one of the key figures in the industry responsible for driving through British Asian talent, most notably Jay Sean.
In addition a ‘Desi Mix’ is also set to hit the ethnic radio stations this summer featuring super Bhangra star H-Dhami.
Preeya, who signed her recording contract with Mercury Records in late 2009, has been working non-stop on her debut record.
Preeya’s soul has always been engrained in music. This is no whim, but a passionate journey that started in her childhood. Whilst Preeya was growing up she realised there was a void. “I didn’t register it when I was very young but all the women who were most inspirational to me were non-Asian,” she says.
As a teenager she began to think about the conundrum more. Where were the real-life role models for young Asian girls that had been brought up respectful of their heritage but inured by and open to the Western dream of being a superstar?
Preeya adds: “Music is not something that I’ve just plucked out of the air or that I’m turning to capitalise on my exposure in a soap opera. For me it’s always been my passion, something I’ve always wanted to do.”
And now she’s on the way to do it.
Her first single ‘Shimmy’ is an out of the box smash hit which takes you on a journey through the dance floor. Mumzy describes the single with Preeya as “unique, edgy and powerful.”
Working on the single Preeya explains: “When we were in the studio and we started laying it down, building it, it just became so sassy. It’s total escapism, a real brew of sexyness and ethnicity. Having Mumzy on the record has given it a real energy and I hope people will really be able to relate to it.”
Preeya’s sassy, sexy, soulful pop sound combined with Mumzy’s distinctive vocals and urban sound its set to make this single this year’s ultimate summer anthem.
So get ready to “shimmy” this summer with Preeya Kalidas and Mumzy Stranger!
‘Shimmy’ is released on July 26 on Mercury Records