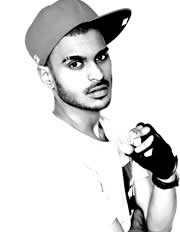 WELCOME Jernade Miah; a 19-year-old singer, songwriter and dancer from East London.
In April he signed to 2Point9 Records, the Independent label who are credited with starting the careers of Jay Sean, Rishi Rich, Juggy D and Veronica. Hailing from East London, Jernade has been developing his craft over the past year as well as fronting his own dance crew. With his new single ‘Switch On Me’ receiving rave reviews, could Jernade be our next musical gem? We caught up with the youngster for a quick chat…
Jernade – newest member of the 2 Point 9 family – that must be an amazing feeling
Thank you! Like you say it is a great feeling to be signed by such a premium label that’s well respected. I think its key nowadays when an artist looks to a team they wanna work with they can see that they have a history of having faith in their artist’s development and being in it for the long haul.
How did it all come about?
I’ve been singing since I was a kid. I would always sing everywhere, round the house, on my way to school, people would think I was talking to myself!
Then as I got older I started getting in the studio with a few producers and that eventually brought me to the attention of 2Point9. Once we talked and realised we all had the same ideas and vision it was a real easy decision to start working together, from all sides!
We hear you’re a bit of a dancer as well – is that something you’re keen on pursuing more?
I’ve loved dancing since I was a kid. It originally started at school where a few of us could move a bit so we started going to rehearsal spots in East London and just having fun. We weren’t thinking about a future career, we just wanted to have a good time. In terms of today’s industry I think if you’re going to be a performer you need to be able to entertain people on stage with how you move as well as how you sing.
If people come out to see me I want to give them a show they will remember!
Tell us a bit about your new single ‘Switch Me On’
Switch Me On is one of those feel good club tracks. The lyrics relate to me winning people over with my music & performance who were maybe hating on me beforehand. The track has a bit of attitude in there and I think it’s one that’s going to get the people dancing!
You’ve had a great response to the single – as a new artist were you nervous about how the single would be received?
Yeah I definitely wanna thank everyone who has been so supportive up till this point. I think as a new artist in some ways there’s less pressure as people have no expectations and can just judge your tunes for what they are instead of being against previous stuff!
There have been a lot of comparisons with Jay Sean – how does that sit with you? Really? We’re actually quite different artistically I think. I understand any R&B artist with Asian heritage will be compared to him, but I’m told he started out mc’ing and that’s very different to me. Dance is where my head was at when I was younger. Plus you gotta remember he’s been in the music game for nearly a decade and I’m only 19 just starting out. Maybe that question is easier to answer in 10 years. I’d like to be compared to his success for sure.
What’s next for you?
Things are crazy right now. It’s so exciting with the amount of different things going on! We’ve just released the first video to my single Switch Me On and I’m in the studio with some really talented producers working on my album. I’m also working on the rehearsals for my live show and hope to hit a few of the Mela’s this summer. I’d say keep checking my website www.jernademiah.com as there’s a lot of cool stuff coming.
Jernade Miah’s debut single “Switch Me On” is out now