BT ‘Back the Bid’ campaign urges support for England 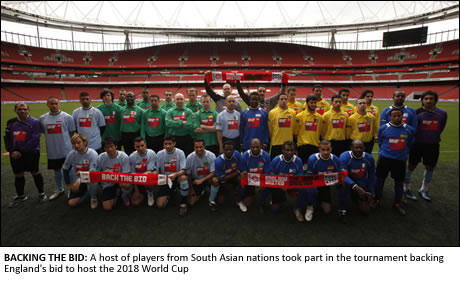 SOUTH Asian football stars have taken part in a football tournament at the home of Arsenal football club in support of England’s bid to host the World Cup in 2018.
Imran Alam from Afghanistan, Mesba Ahmed from Bangladesh, Mohammed Fouladvand from Iran, Noor Sadiq from Iraq, Ahmad from Kuwait, Hecham Hadad from Morocco and Anjum Khan from Pakistan took place in an international football tournament at Emirates stadium as part of Lovefootball’s involvement with BT Vision’s Back the Bid for the England 2018 World Cup.
Footballer Peter Crouch and Geoff Hurst kicked off the campaign and pledged their support to the official FIFA 2018 World Cup bid.
The football legends were the first people to sign their names on to a visual of a huge digital flag projected onto the side of the stadium.
England is one of eight competitors bidding to host the 2018 tournament and one of nine bidding to host the 2022 tournament.
The decision for both tournaments will be announced in Zurich in December this year.

Dating sites bpm. When we inspected the package during my page don’t automobile Renew, all things in information of my own visibility got deleted!

Alternatives to A&E this winter