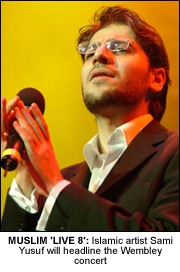 A MUSLIM version of Live 8 will be staged at Wembley Stadium in October to highlight the humanitarian crisis in Dafur.
More than two thirds of the population in Darfur are dependent on aid due to escalating violence in the region, according to the Disasters Emergency Committee.
The concert, which is expected to take place on October 21, is expected to be a sell-out. Islamic artist Sami Yusuf is to headline the event.
Jehangir Malik, the UK national fundraising manager of Islamic Relief, said: “We are going for our own equivalent of Live 8. We are going for a concert at the end of Ramadan to celebrate Eid.

“It will be people trying to raise funds and raise the profile. We should hopefully see a sell-out and it will be a milestone.”

There will also be an information blitz throughout Ramadan calling for people to “rise to the challenge of helping Darfur” with special messages sent to mosques and imams for Friday sermons.
Fareena Alam, the editor of the Muslim magazine Q News, was part of a Foreign Office-backed Muslim delegation which travelled to Darfur to talk to victims of the violence, refugees, tribal leaders and government officials.
She told a Foreign Office press conference: “It is very shameful that we can get very, very hot and bothered about other issues.
“There is a lot of information about Darfur. There is no doubt this is Muslim-on-Muslim violence. In Iraq the enemy is externalised.
“In this situation where are the values that we talk about, that killing one life is about killing humanity? This has to be high profile. It is a huge embarrassment to us.”
Mr Malik said: “This is a thorny issue for us and it is clear that we have to do more.
“It is a challenge for us because people are highly motivated and get highly charged in other areas, and we need to do considerably more.”
The delegation also criticised the lack of financial aid given to the region by Muslim countries in comparison to Britain and the US.
Saifuddin Ahmed, a spokesman for Muslim Aid, said: “I feel that the Muslim community (worldwide) must match the level of response that our Government has done.”