Home Interviews ‘I wrote The Infidel for Omid’ 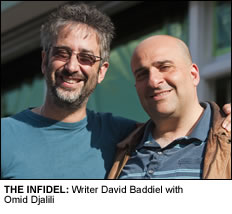 HE’S the brainchild behind the religious-comedy ‘The Infidel’. Here David Baddiel talks to Jett Mall about making thefilm for comedian Omid Djalili and how he was mistaken for a Pakistani man
David where did the idea for the movie come about?
It came about because when I first appeared on television a lot of people thought I was Pakistani. I used to get a lot of fan mail telling me that I was the best Pakistani comedian that people had ever seen. I always thought that was great, but it became apparent to me that if you’re a dark Jewish bloke you can easily be considered Muslim and at the time I never really thought about it but then when you look at it the two communities are opposites. I thought we could do a trading places type movie.
Why did you choose Omid for the role?
I love Omid he’s fantastically funny and a sweet man. I thought of him because he can be seen as belonging to pretty much any religion. I wrote it for him really, on the basis that he was a bloke who could be either Jewish or Muslim. The movie is a great feel good movie; it’s edgy. The basic steel of it is it tries to diffuse tension that people sort of imagine is there. It helps when you are dealing with a contentious challenging issue, to have someone at the centre of it who people love anyway.
Are you in anyway nervous about the reaction the film will get?
I’m nervous in general, when you put anything out there you want people to like it and they’ll always be people who won’t. So far, I’ve started to get quietly confident where the main support of this film will come from and it’ll be Jews and Muslims. We’ve shown it to packed houses of women in hijabs, and they’re the ones who really like it. I think they’ll like it because there’s never been a film before which has shown Muslims to be ordinary people.
You mention the film’s positive feedback – do you think that’s primarily down to the fact that your Muslim characters are ‘ordinary people’?
Well there’s an ordinary Muslim family at the heart of this film, who are likeable ordinary people who aren’t defined by their religious or political beliefs. That seems to be what people are responding to, the fact that there is finally a film where Muslims aren’t seen to be suicide bombers. 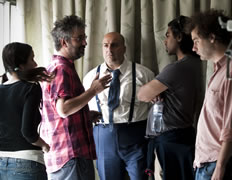 For the minority who might be offended by the film, do you have a message for them?
The film isn’t trying to be offensive; I would say go and see the film because virtually everybody who has seen it has not been offended. So go watch it! The film doesn’t in anyway try and make sacred things funny; the movie is about culture, identity and modern Britain.
Do you have any funny stories from filming?
One of the funniest moments we had but had to cut it out is of Omid dancing at one point at the moment, he’s wearing quite loose trousers and they fell down and carried on dancing for some time and then fell over. We didn’t put it in the film because it looked like we’d rigged it up and we hadn’t it was a complete accident!
What can we expect next for you?
I’m writing another movie at the moment, which is completely different – it’s an American teen comedy and I’m in the process of writing a thriller. Plus a novel coming out next year, which is nothing like this. I’m trying to keep doing different things. I’d rather write and direct films in the future over performing.
The Infidel is out nationwide on 9 April
Related Articles
The Muslim Homer Simpson – Interview with Omid Djalili
Photo Gallery – Pictures from The Infidel