Mahmood Ahmad missing for over a month as police continue hunt 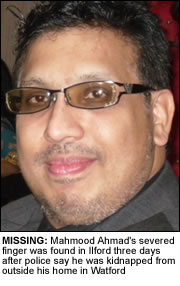 DETECTIVES investigating the disappearance of a Watford man whose severed thumb was found three days after he was reported missing have released CCTV footage of his car.
Mahmood Ahmad has not been seen since he left work at a kebab house in Watford on 7 March.
CCTV footage released by Hertfordshire Police shows Mr Ahmad’s car, a black Citroen C2, in Pitfield Street, Hackney just before 1am on 7 March.
Police believe he was kidnapped from outside his home on Radlett Road hours later.
Three days later Mr Ahmad’s dismembered thumb was found in Ilford.
Detective Chief Inspector Mel Burn, of the Bedfordshire and Hertfordshire Major Crime Unit, said Mr Ahmad’s family were desperate for answers into his disappearance.
“A month on from when police received the missing persons call about Mahmood from his family, we are renewing our appeal for information,” he said.

“We are hoping this fresh footage will jog people’s memories about what they may have seen around the time of his disappearance.

“This is a very difficult time for Ahmad’s family, to still have no news, and your information could help to finally give them the answers they so desperately need about him.”
Mr Ahmad’s family have set up a website and Facebook page to appeal for information on his kidnapping. They have also been appealing at local Mosques across the country for information.

His wife, Farah, made an emotional appeal for information on the second anniversary of their wedding.
Describing her husband as a “kind, giving, family man”, she said: “These last few weeks have been unbearable and we are desperate for any news or information on Mahmood. 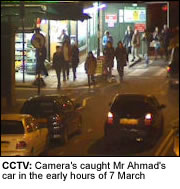 “He is a kind, giving, family man and we all miss him terribly.If you know anything about his kidnap or saw any suspicious activity, I am appealing personally to you to come forward.”

Five people have been charged in connection with Mr Ahmad’s disappearance.
Two men and two women have also been arrested in relation to the investigation and are currently on police bail while inquiries continue.
Anybody with information is asked to contact the incident room number 01707 355798 or call Crimestoppers anonymously on 0800 555 111.