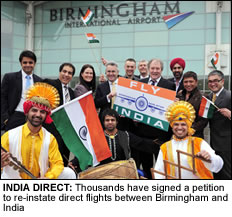 MORE then 20,000 people have signed a campaign for the return of direct non-stop flights between Birmingham and India.
The ‘Fly India’ campaign has gathered pace since it was launched last October.
The 20,000 strong signature petition has already been delivered o the Indian Government’s Minister for Civil Aviation in Delhi.
However, the two bosses leading the campaign say that there’s still much more that can be done and are urging the region’s business and Asian communities to get behind their ‘Fly India’ campaign to help them reinstate direct non-stop services.
Councillor Mike Whitby, leader of Birmingham City Council and organiser of the initial petition said: “The response received following the launch of my petition last October has been tremendous, with more than 20,000 signatures already received and the petition is now en route to India. Nevertheless, I am now working with the Airport to give the Fly India campaign another push and gain even more support so that we can demonstrate, with little doubt, the overwhelming demand for direct flights between Birmingham and India.
“What we need now is for the Indian community and businesses to get behind this campaign to ensure we send a powerful message to those airlines that are able to provide direct flights, such as Air India, Kingfisher and Jet Airways.”
To secure its slots at Heathrow, Air India stopped direct flights to the country in October 2008.
The campaign is also being backed by Birmingham International Airport.
Its CEO Paul Kehoe said he found it “incredible” the city was still without direct links to India.
“To secure its slots at Heathrow, Air India sadly moved its Delhi-Amritsar-Birmingham-Toronto in 2008 to the capital. During its three years at Birmingham however, demand was never a problem. In fact, in the last year of operation alone it carried 100,000 people between Amritsar, Delhi, Birmingham and Toronto and its load factors were often more than 85% full.”
“We therefore want to give the power back to the community by asking them to support our campaign and give us the evidence so we can show prospective airlines and the Indian authorities that there’s a compelling case – both economic and social – for services to be re-introduced.”
To sign the petition log onto http://flyindia.birminghamairport.co.uk