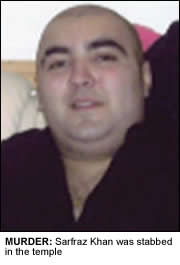 DETECTIVES have made a new arrest in the murder of a Birmingham father.
A 16-year-old was arrested in the Balsall Heath area of the city this morning, police confirmed.
The youth was arrested on suspicion of the murder of Sarfraz Khan.
The 24-year-old, who has two young daughters, was stabbed in the head with a screwdriver following an altercation with a number of youths in Larches Green play area on Long Street, Sparkbrook, on Friday 12 March.
He died in hospital from serious head injuries.
Detectives have already charged another teenager with Mr Khan’s murder.
The 16-year-old appeared at Birmingham Magistrates on Saturday 20 March charged with Mr Khan’s murder.